Good evening (as I type this anyway!).  This will be the first in a glut of posts, for astro life has been busy and fruitful.  To bring you up to speed.  The current situation of not being able to work for several weeks has also timed itself with a good settled spell of weather, meaning that there has been lots of action in the observatory at nights, resulting in the rather pleasing backlog of data to be processed, and the even larger backlog of blogs posts to write.  Rather than knocking out one long blog post, I'm going to split them up into more manageable chunks.  As well as imaging, I've knocked together a new video, taken part in live Q and A's and had some brilliant observing nights out in the back garden.
So, where were we?  Oh yes.  At the end of my last post, I was somewhat lamenting the noisy images which I seemed to be creating, along with anomalies appearing which really ought to have been addressed with the flat frames thrown into the mix.  I finished up by having a rethink on what I could do to help tidy up the data I've been collecting, be it changing exposure times, gain settings etc.  I then had a rethink on the rethink and decided that the data I was collecting was actually OK, and perhaps my calibration frames needed more attention.  The result of this thinking about rethinking resulted in me creating new libraries for the dark and flat frame libraries.  It's kind of helped!
We are right in the middle of galaxy season with Leo, Coma Berenices, Virgo and Ursa Major amongst other constellations, putting on their best displays.  It's been tricky to decide what to image each night.  Keeping an eye on when the target crosses the meridian each night, trying to avoid having to perform a meridian flip along with mount versus pier clash have all played their part.

The first target in this mini collection is NGC 4656 in the constellation of Canes Venatici.  This galaxy is often imaged with it's near neighbour, the Whale galaxy, but I wanted to image it in it's own right, and give it it's own place in my collection.  So, the main thing to remember with this image is that the light frames (the ones actually taken of the target itself) are using exactly the same settings and equipment as those in the previous posts.  It's the calibration frames which are different.  I have included more dark frames and more flat frames in the creation of the master calibration frames.
I'm quite pleased and encouraged with the results.  A little more work may need to be done, but the target galaxy is in the centre of the image, with the Whale galaxy photobombing on the edge of the image, as if to say 'what about me????'
Can you guess why NGC 4565 is also dubbed The Hockey Stick galaxy? 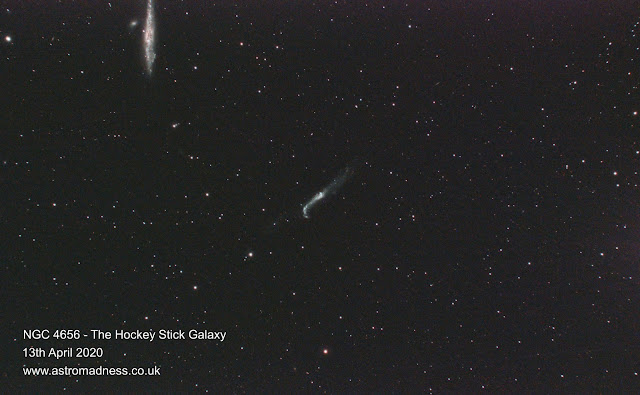 The second image in this brace of images look at the photobombing Whale galaxy.  This galaxy has an apparent smaller companion galaxy, designated NGC 4627.  Depending on the orientation of the image, it could be said that this companion galaxy forms the spout of the Whale as it exhales, or, if flipped 180 degrees, the pectoral fin of the Whale.  The fact that I have it turned at 90 degrees in my image may result in a degree of confusion as heads are tilted from one direction to another in and effort to see what I'm talking about.  Either way, it's a stunning galaxy to image, and with a nice big dob, looks very nice in the eyepiece, along with NGC 4656.
This image was taken the night after NGC 4656, and took somewhere in the region of 3 hours of light frame collection, along with around 2.5 hours of dark frames and approximately 40 flat frames to throw into the calibration mix. 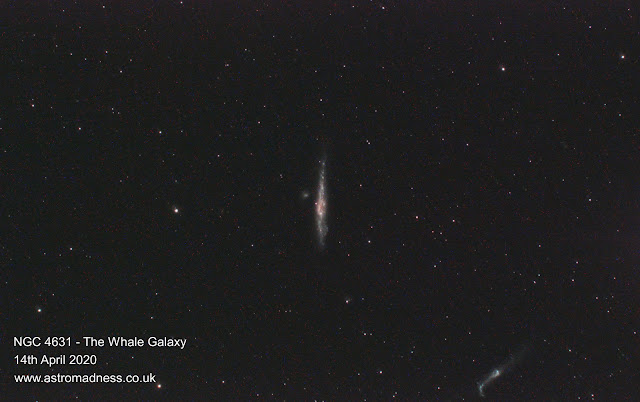 So, that's it for this mini post.  More to come as I try to cover off more imaging, a guide to the observatory video, visual sessions and live streamed Q and A's.
All the best.  Say safe.
Labels: Altair 80ED-R Altair Hypercam 183C Altair Quadband Filter Hockey Stick Galaxy NGC 4631 NGC 4656 Whale Galaxy