Regular readers will know that after ever Astrocamp, I like to sum up the long weekend with a regular blog post.  Well, how the bloody hell am I going to pad this one out????  So, what do you do when you can't all meet up for the main event of the Spring?  Well, as it turns out, you do what every other human on the planet seems to be doing at the moment, and shift it online.

On a day where I, and people across the land, should have been arriving at camp, and setting up our tents and scopes, we were all sat at home, under lockdown conditions just like we have for over a month.  It has become the new norm.  And people seem to be coping with it in different ways.  Some better than others, but we get by.  In this particular situation, I could sit back, look at what we were all missing, and get generally down in the dumps about it all.  Or, I could pick myself up, and try to make something of it, and join a whole bunch of other people trying to make the most of a pretty glum situation.  I chose the latter!
I decided to replicate my pitch out in the back garden, and so hauled all sorts of kit out into the back garden and set it up.  OK, I admit, I had plenty of time on my hands!  In a rather bizarre way, it at least felt like camp had started.  Being surrounded by everything from a toilet tent and telescope to a water carrier, stove and slow cooker.  Mind you, I do look back at this and wonder what exactly I was trying to achieve, but it kept me amused for a while... 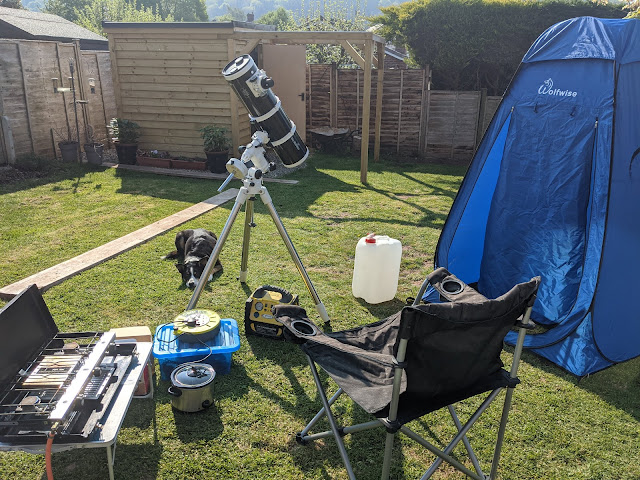 Over the last couple of camps, I have taken my bike with me, so I can go out for a ride during arrivals day.  A great chance to get out and usually see some of the Brecon Beacons and Black Mountains.  Indeed, this time last year, I went off on 70km ride starting and finishing at camp.  This year, I wanted to replicate this.  Fortunately, one of the few reasons we can currently leave the house is for a period of daily exercise.  So, with the Sun up and the sky blue, it was time to replicate that part of camp too! 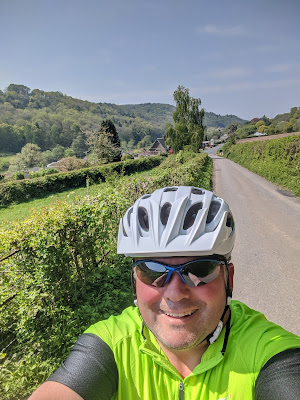 Night 1, and people were posting images of themselves setting up their scopes in their own gardens to take advantage of some fantastic weather and clear sky.  It seems that everyone was determined to take part in some way or other, and was great to see.  For me though, the local forecast started off good, but cloud was soon to come in and obscure the stars for the rest of the night.  Unfortunate, but typical of camp on so many occasions!

When I woke at home for the second day of my sudo Astrocamp, I thought back to how things typically look after a good night at camp.  There are relatively few things needed to make a classic night at camp.  1.  Awesome people.  2.  Clear sky.  3.  Let's call it 'socialising'...
There are certain things you will generally see at camp if you are up and about early enough.  Telescope tents covering telescopes, camping chairs, and socialising leftovers. It was time for another re-creation in the back garden, and even the customary barrel of Astrocamp ale made an appearence! 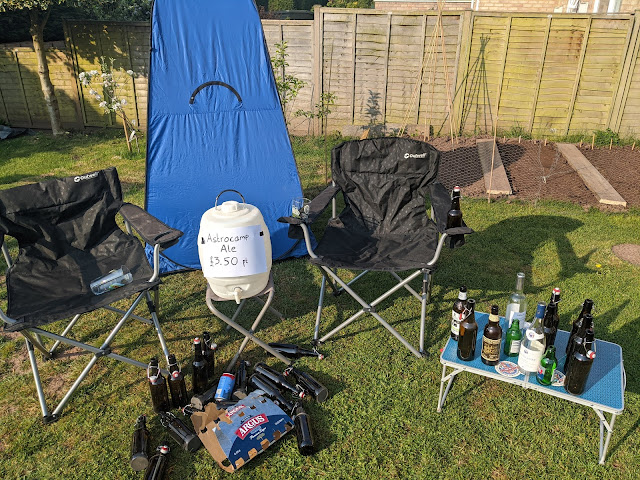 Quite what the neighbours might have been thinking , I don't know, but it was time to carry on with the rest of day 2. And that means only one thing. A trip to the café for a cooked breakfast. Yep, I re-created that too... 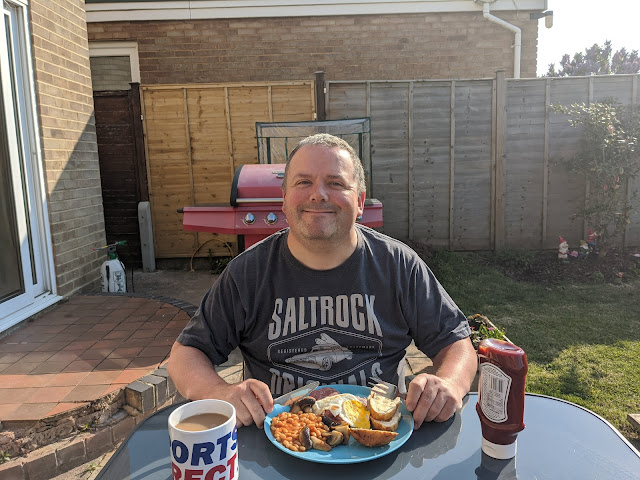 The highlight for many an Astrocamper is the afternoon spent at the Spiral Arms where we would usually have talks and quizzes.  We could not let the weekend go without at least having a quiz, and it also turned out to be a brilliant opportunity to catch up with everyone via the power of Zoom!  For me, this was both the best bit, and the saddest bit of the whole weekend.  Finally a chance to see everyone, and talk to everyone.  This is the part of the whole event I missed most.  A big shout out to John for putting himself forward to organise the quiz.  Such a  great way of bringing everyone together, and the uptake was brilliant.  So many familiar faces and voices.  It was just awesome to be involved.

Day 4. Time to head home, from the back garden.

The day where everyone wakes and knows the inevitable can't be delayed any further.  Time to go home.  In a scene often witnessed at camp, people start the tradition of tent wrestling as they try to get it all packed down and fitted into the bag.  Yep, I had a go a recreating this too...

When things improve.  When we get back to normal.  Two phrases that we have all heard with increasing regularity during the last couple of months.  By our very nature, we are social creatures.  We like spending time together be it in large groups or small.  The circumstances we find ourselves in at the moment are unprecedented in our lifetimes.  While we can leave the politicians try to make out that they know what they're doing, and that their course of action is the best one in the world to take, the truth is that it is down to us as individuals to look after ourselves, our families and our friends.  This weekend has shown me that in some situations, we only have ourselves to turn to, but in other situations, if we pull together, we can make the best of many things.  It's easy to become totally isolated because we don't get the physical company we like as humans, but by rolling up our sleeves and immersing ourselves in things that we can control, we can come out all the better for it.  Having contact with so many regular Astrocampers over the last weekend has been really good for the mental health and re-affirms what a brilliant bunch of people they all are.
In years to come, I expect we will be able to read back to this blog post and wonder how we coped with it all.  It's been the weirdest, hardest and possibly most pointless and worst blog post I've ever written, but as I have always maintained, it's my way of just recording what I get up to in my astronomy activities, and if anyone else wants a nosey and a read, then great.
Finally, when news broke that this Astrocamp had to be cancelled, everyone who had paid for their pitch had an option of either claiming a full refund, or donating the money to local business that would otherwise benefited in some way by the event taking place.  During the Zoom quiz, John announced that together, we had donated well over £2000 which was being split between the campsite at Cwmdu, the local pub The Farmers Arms and the local café and tea rooms.  A fantastic gesture by a great bunch of people which I should go a little way to supporting those businesses.
Here's to the next Astrocamp!  Stay Safe.
Labels: Astrocamp