Salvation in the Observatory.

Well, this is all a bit weird.  I'm going to mention it once at the start, and then not mention it again.  Promise.  Bloody Covid-19 virus.  It's turned the whole globe inside out.  (Note, not upside-down.  That would be playing into the hands of another bunch of nut-job flearther conspiracy theorists).  Our current situation.
1.  Furloughed from work until the end of May at the earliest.  Furloughed. A word I'd not even heard of until a month ago!  And now, all of a sudden, everyone knows about it.
2.  So much unexpected time on our hands with no work, and being on social distancing measures like the rest of the world.
3.  Along with No. 1, come the mental stress, anxiety, worry or call it what you will.  The medium term prospects of being able to retain our jobs with the happening at the same time as the 2 year anniversary of the loss of Dad to cancer.  With all the crap and fake news doing the rounds, I decided to take a break from my social media accounts.  It's just not what I need right now, and I'm glad to say, I feel better for it.  In a way, thankfully No. 2 has played a part and given me a chance to step back from everything to focus on and appreciate what's good in life.
4.  My planned trip for Astrocamp has been cancelled, replaced by a live Q and A which the organisers have very kindly put together and will be streamed on YouTube.

It's good to get that off my chest.  Rant over, and time to concentrate on the positives.  The unexpected time off along with some of the clearest weather for many months has meant that I've been able to get out under the clear sky, albeit with a near full moon but with the added bonus of not having to wake up for the alarm for each morning.  I've managed to produce a set of 4 images, in this, the start of my Galaxy Season.  So, it's time to present the set of results.  First thing to remember about these images is the calibration.  I've got, or rather had, a massive dust bunny on the chip cover which resulted in a rather large blob on images.  This should have been dealt with by using flat frames.  The problem was that I took all the calibration frames as I went along, but didn't process any of the data  until much later.  In fact, not until after I had removed and cleaned the camera, meaning that it was too late to take a new set after finding that the original set was rubbish.
I could probably sort out the image defects in GIMP if I had the inclination to do so, but for now, I'll leave the images as they are.  I can always come back to them at a later date, and lets face it, I seem to have plenty of time on my hands at the moment.
Generally, these images are made up of 3 to 3.5 hours exposures of 5 minute subs. 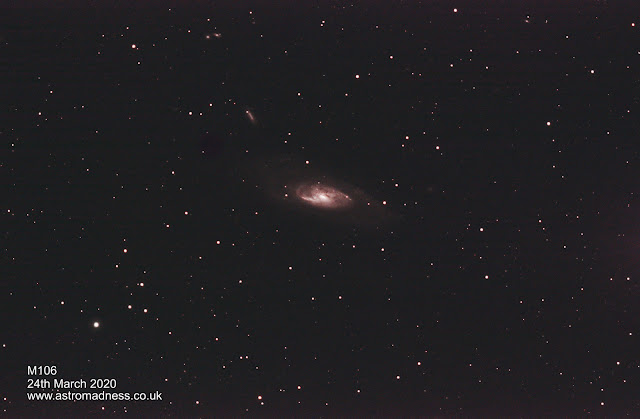 I really like this image and the potential it shows.  If you look carefully, there are a handful of other galaxies in the background, but the main galaxy shows some good structure with a hint of more structure to be revealed on the outer edges. 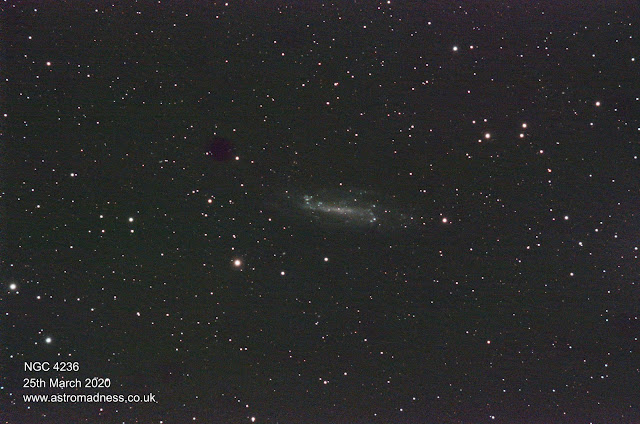 This is quite a noisy image, which I think is down to the longer 5 minute exposure.  However, the galaxy is still well defined and would benefit from more data and better calibration frames. 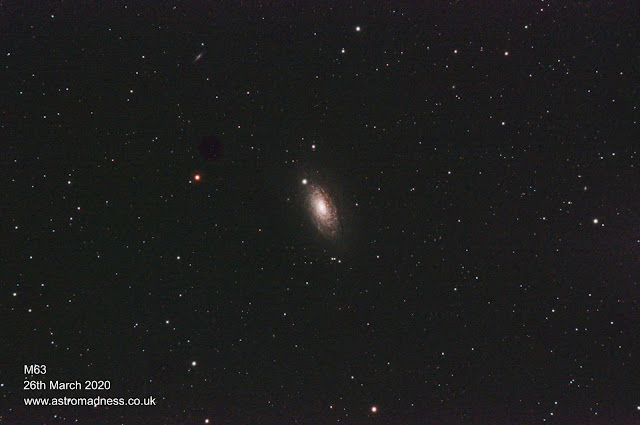 When I processed this image, I was pleasantly surprised at the amount of detail in the core of the galaxy.  I've managed to preserve some of the colour of the surrounding stars too.  Again, a couple of other galaxies can be picked out in the background. 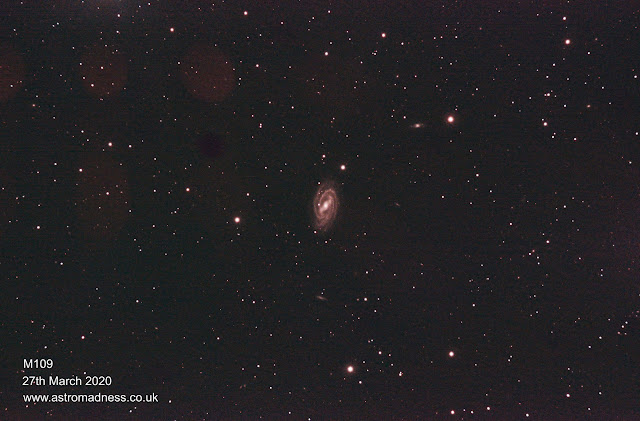 This is perhaps my favourite image out of the 4, and is certainly a galaxy I will return to image again.  A little noisy, but the spiral arms of this galaxy are so well defined, it's stunning.  Also, the surrounding galaxies visible just shown how rich this region of the sky is.

As I alluded to earlier, these images, though pleasing, are noisy.  I have struggled to deal with the background noise throughout the processing stages.  Some of this can be accounted for with the quality of the calibration frames.  However, I can't help but think that 5 minute are pushing the limits of SharpCap and the 183c Hypercam.  My intention now is to carry out another analysis using the auto histogram function in SharpCap, but limit the exposure length to 3 minutes.  I will still aim for 3 to 3.5 hours total per image.  It will be interesting to see where that gets me, along with better quality calibration frames.
I've just re-polar aligned the mount and have started a new imaging session on another target.  There are a couple more opportunities in the coming evenings, so I'm going to make the most of the current circumstances and see what I get.  Until next time, clear skies!