This holiday hasn't come soon enough.  We've both been looking forwards to this break for months.  We've returned to Tretham Mill on the Roseland Peninsula in Cornwall for a camping holiday with our dog Gelert.  Cornwall's night time skies are fantastic if you can get to the right place.  We are far enough away from Falmouth that the only visible sign of light pollution is just above the horizon to our West.  Other than that, the small lights that illuminate the road around the campsite are the only other thing that I need to contend with when it comes to astronomy.  But that is easy enough given the number of hedges around the site, and with a bit of thought when positioning the kit.
We'd turned up and pitched camp and the forecast for the following two nights was good.  The first night, I chose to break out the new toy and give first light, if you like, to my iOptron Skytracker mount.  I bought it from Tring Astronomy back at the beginning of the Summer after seeing one at AstroCamp.  When it arrived, it was clear that I would need to come up with a way of mounting it on the equipment that I already own.  My normal camera mount is extremely light weight and can handle the weight of the iOptron tracker on its own.  Let alone with a DSLR on it too.  The only other option was to try and put something together that worked with my existing SkyWatcher mount.  A bit of wood glue and a salvage operation of some metal plate destined for the scrap skip, the only thing I needed to buy was a screw for attaching the mount to the new contraption and I would be ready to go.  This is the final contraption... 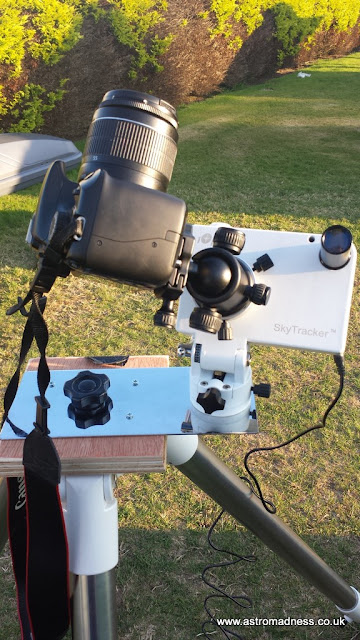 This time of year, the skies are particularly rich with DSOs that can be captured in a photograph using a normal DSLR camera.  So, it wasn't going to be a night of chasing things around the night sky and ticking of targets from my list.  Instead, I chose to just get to know the tracker and its capabilities a bit more.  I plugged everything in, and connected my laptop to the camera so I could start live shooting and seeing the results straight away.  Astrophotography can also take a lot of room on the SD card, so it was useful to be able to save the photos direct to the hard drive of the laptop.
I took 4 different sets of photos, mostly around the Andromeda constellation.  I decided to take them home for some stacking and processing.  Depending on the results, I might post the results of that effort at a later date.  However, I did take a single exposure of the Andromeda galaxy that I was quite pleased with for a first attempt. 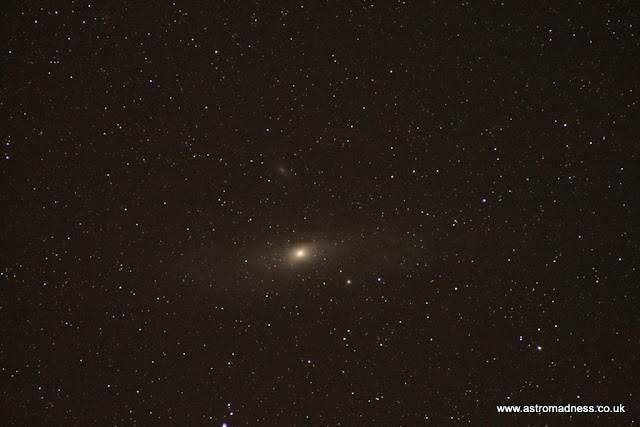 So, that brought an end to the first night under the stars.  The dew has caused havoc as it always does.  I need to look at investing in a dew shield or dew bands suitable for the DSLR lenses.  The problem with heaters though will be trying to keep the dew from settling, but trying to avoid warming the chip up in the camera.  I love a bit of problem solving me!
Labels: Andromeda Astrophotography Cornwall iOptron Skytracker Tring Astronomy Centre