The morning of Saturday 19th September heralded the start of AstroCamp.  A gathering of amateur astronomers from all around the country in the small village of Cwmdu, just outside of Abergavenny in the Brecon Beacons.  This was my second visit, with my first being in May of this year.  AstroCamp is renowned for being the friendliest star party in the UK.  Back in May, I had such a good time, I vowed that I would sign up again for September’s event.  I met people who were all too ready to accept a stranger in camp, and they soon made me feel at home.  Regardless of the fact that we only had a matter of a couple of hours observing over the whole 4 days in May, it was because of the friendly nature of everyone that I wanted to go back. 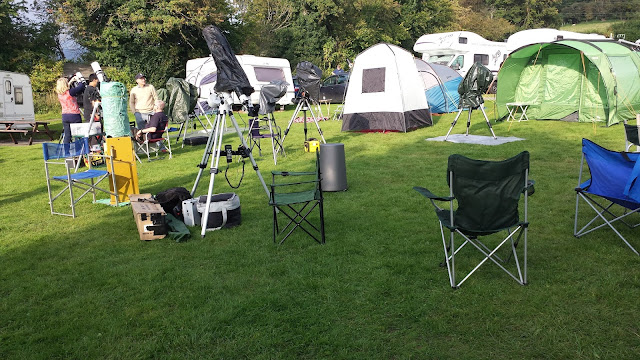 This was a theme that continued, and that I also wanted to help other first timers experience.  I like to think that I contributed to just that.
This camp like before was exceptionally well organised.  The team behind the camp are found here.
This month, we had some excellent skys on the first night, which I have put together a quick report on later in this post.

To the Spiral Arms

On Sunday, we all descended to the newly named Spiral Arms which is the name given to Cwmdu Village Hall when we take it over for the afternoon.  The main idea of this part is to have a good time, listen to some excellent talks, to test your astro knowledge against the main Pub Quiz, and then the final Masters of the Universe quiz.
There were two talks this camp.  The first was from Matt Kingsnorth, Flight Director from the ESA (that’s the Essex Space Agency by the way!).  You might have seen the YouTube video below trending this Summer.

He was one of a partnership that run a project to launch a craft into space, collect data and photography, and to retrieve the craft on its return to Earth.  All for £1000.  Oh, and there one or two other reasons too…  This is their story.

So, as you can see, to help achieve the goal, please tweet
“@bad_robot #HeyJJ Don't forget the premiere tickets for @MattKingsnorth & @TurboBungle”  Let’s see if we can get them those tickets! 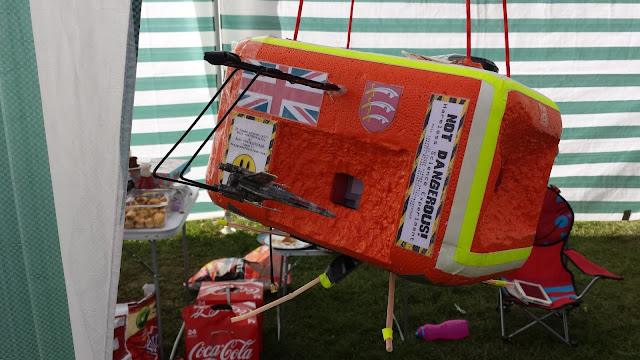 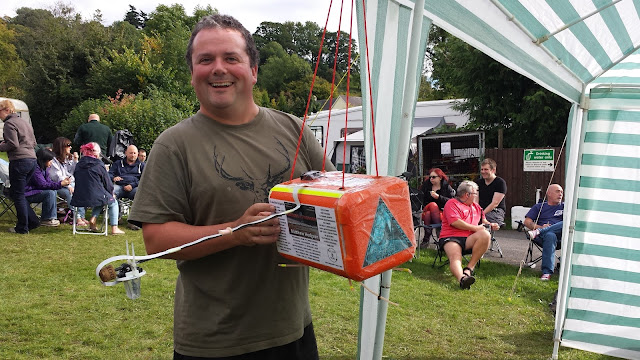 The second talk of the evening was by Jenifer Millard @JeniMillard.  This was the third time that Jenifer had been guest speaker at AstroCamp.  Jenifer has just returned from the AAO Siding Spring observatory in Australia where she worked on the Huntsman Eye project where the intention is to use off the shelf canon optics to photograph the sky.  The talk was opened with an introduction into the history of astronomy.  Of particular interest was the Aboriginal peoples thoughts on astronomy and what they attribute to the different constellations, although I gather from talking to Jeni that this sort of information is becoming harder and harder to learn and record as it’s sadly becoming lost in the midst of time, permanently being consigned to forgotten history.
For more information on the project, visit their Facebook page at https://www.facebook.com/HuntsmanEye?fref=nf for links to videos and project news.
If you ever get the chance to listen to Jeni at any event, please do so.  You won’t regret it.

Previously, I posted my intended target list that I wanted to have a go at finding whilst at AstroCamp.  I took these from various books, charts and publications I have around.  So, out of a target list of around 46 objects, I set the SBT up on The Common in the middle of camp, and set to work on what was to be the best night for observing over all the main days of camp.  The sky was brilliant and just what I have come to expect from rural observing.  That night, I managed to tick off only 3 new objects from my list, but I actually observed 6 or 7 objects in total.  Also during the night, whilst holding my eye to the telescope, there were many “ooooh” and “aaahh” sounds coming out from everyone else as we witnessed a mini meteor shower.  An awesome site.
Part of observing on The Common is to take part in the communal observing aspect of camp.  Shouts of “ we’ve got Saturn” early on the evening lead to a steady stream of people heading to one corner where someone had managed to see Saturn before it sunk below the welsh hills and out of sight for the rest of the evening.  This was then followed later by John on Bob the Dob proclaiming “I’ve got the Veil Nebula”.  This resulted in a small crowd teetering on a step ladder in the pitch black, craning their necks to look through the eyepiece.
While all this was going on, I spent about 40 minutes talking to a couple who weren’t part of AstroCamp, but who were staying on the campsite.  Their names were Bart and Lisa (no Simpsons jokes please – although I did resist the temptation to ask where Homer was…) and they were Dutch.  I don’t think they had ever looked through a scope before, so I was more than happy to give them a brief tour of some of the more well-known targets for the evening including The Ring Nebula, The Western Veil and of course, Andromeda.
My observing though was sadly brought to an end comparatively early, especially as the clear skies were due to remain for several more hours.  By 11.00, I started noticing some of the brighter targets were becoming harder to focus on, and eventually wouldn’t come into focus at all.  I shone my torch onto the secondary mirror, and my fear was confirmed. Dew had begun to settle on the mirrors surface, and with no way of moving it, that was an end to my visual observing for the night.  I moved the SBT back to my tent and noticed various other people were beginning to suffer similar issues.  But, I had a reserve idea up my sleeve.  As I was packing away, I noticed the Pleiades were beginning to rise about the surrounding hills.  They were visible from out the front of my tent, and so I decided to get out the camera and tracking mount for half an hour or so to see if I could get some pictures.  I didn’t want to set the laptop up because of the light shining and possibly upsetting other observers, so I stuck to using the screen on the back of the camera.  I managed several shots of various length exposures.  They weren’t amazing, but there is definitely potential there to give me some good results later in winter.
So, my final tally for the night reads as:
1.       M57 The Ring Nebula
2.       The Western Veil Nebula
3.       The Eastern Veil Nebula
4.       The North American Nebula
5.       The Bubble Nebula
6.       Andromeda
7.       The Pleiades
The night also give me chance to get first light on two new toys.  A beast of an eyepiece, the 2” 40mm Explore Scientific and also the 2” UHC filter.  Most impressive!

I could go on for ages with this blog entry, trying to list everything that happened, who I spoke to, what I did and so forth.  But I suppose a blog is supposed to be reasonably concise to try and keep it kind of interesting.  I have collected many fond memories.  I am in danger of remembering names.  Since people have got back, my Facebook and Twitter feed have been alive with people giving their thanks, recalling the weekend’s events, and of course, vowing their attendance at next Mays event.  As well as the memories, I’ve also compiled a list of spares that people might like to consider, for they seemed to be in demand…
1.       Marquee
2.       Grub Screws
3.       Toilet/Utility Tent
4.       Counterweights
5.       BEER (I can’t believe the Spiral Arms run out ;-))
And so, the closing plea.  If you’re on social media of some sort, track down these people, give them a follow, and think about coming to AstroCamp some time.  You don’t need any kit, just a sense of humour, and not to be scared when a stranger comes up to you in the middle of the night with a red torch and asks you if you fancy a peak!