Good evening everyone.
Today, 20th March 2015, we, in the UK were subjected to a partial solar eclipse.  In my part of the country, we had around 86% coverage.  A while ago, I contacted my friend Jim to ask if he was interested in a joint observing session.  We come to the conclusion that it would be worth organising, just leaving the location to be decided.  The weather forecast this week has been changeable, but fortune favored us across mid wales, the borders and into the Midlands.  Last night we decided that a good vantage point for the event would be the plateau car park near Hay Bluff in the Black Mountains.  I arrived first and joined a few other people who were already there setting up ready for the partial eclipse to start.
I took with me, my 150p reflector telescope and my home made solar filter along with the eyepiece case, DSLR and of course, Gelert the dog.  I set the DSLR and telescope up so I could use prime focus photography through a x2 barlow.  This give me an excellent field of view where the sun more than filled it.  I also set up the GoPro camera to take a time lapse film of the event.  I was hoping that it would capture the dip in light, but as it happened, unfortunately, very little can be detected.

Once set up, I used my solar specs to keep an eye on progress whilst waiting for Jim to arrive.  First contact was made by the moon and sun alignment which showed up quite well in the camera view finder. 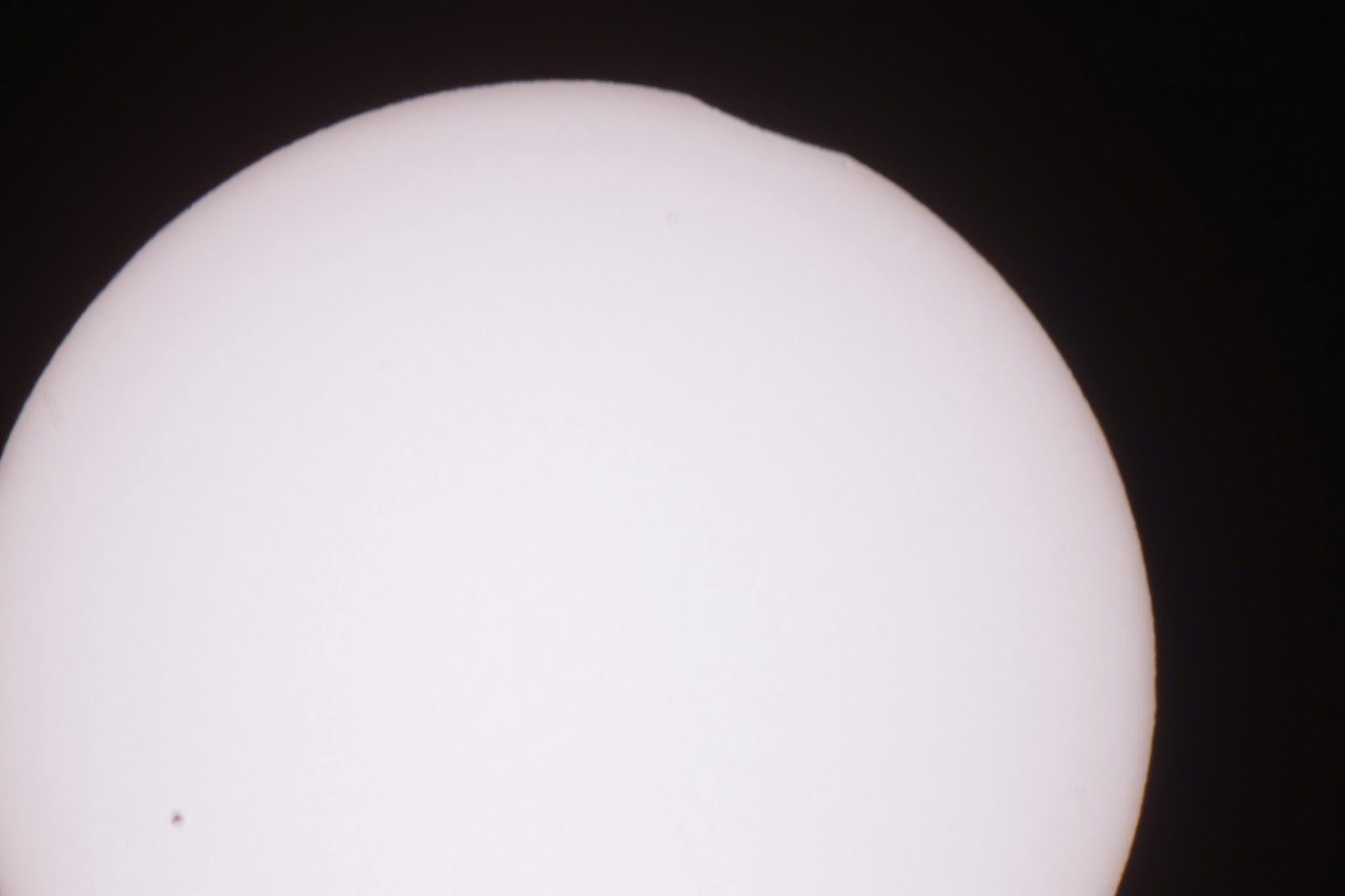 Also visible in this photo in the lower left corner of the from is a sunspot.
Jim arrived and we caught up while maintaining a watch on the progress of the eclipse.  From time to time we were also joined by other people who had come to see the eclipse and it was a pleasure to show them the view on the preview screen of the DSLR as the frames were being taken.
The solar specs certainly did an excellent job giving a very crisp and clear view of the eclipse. 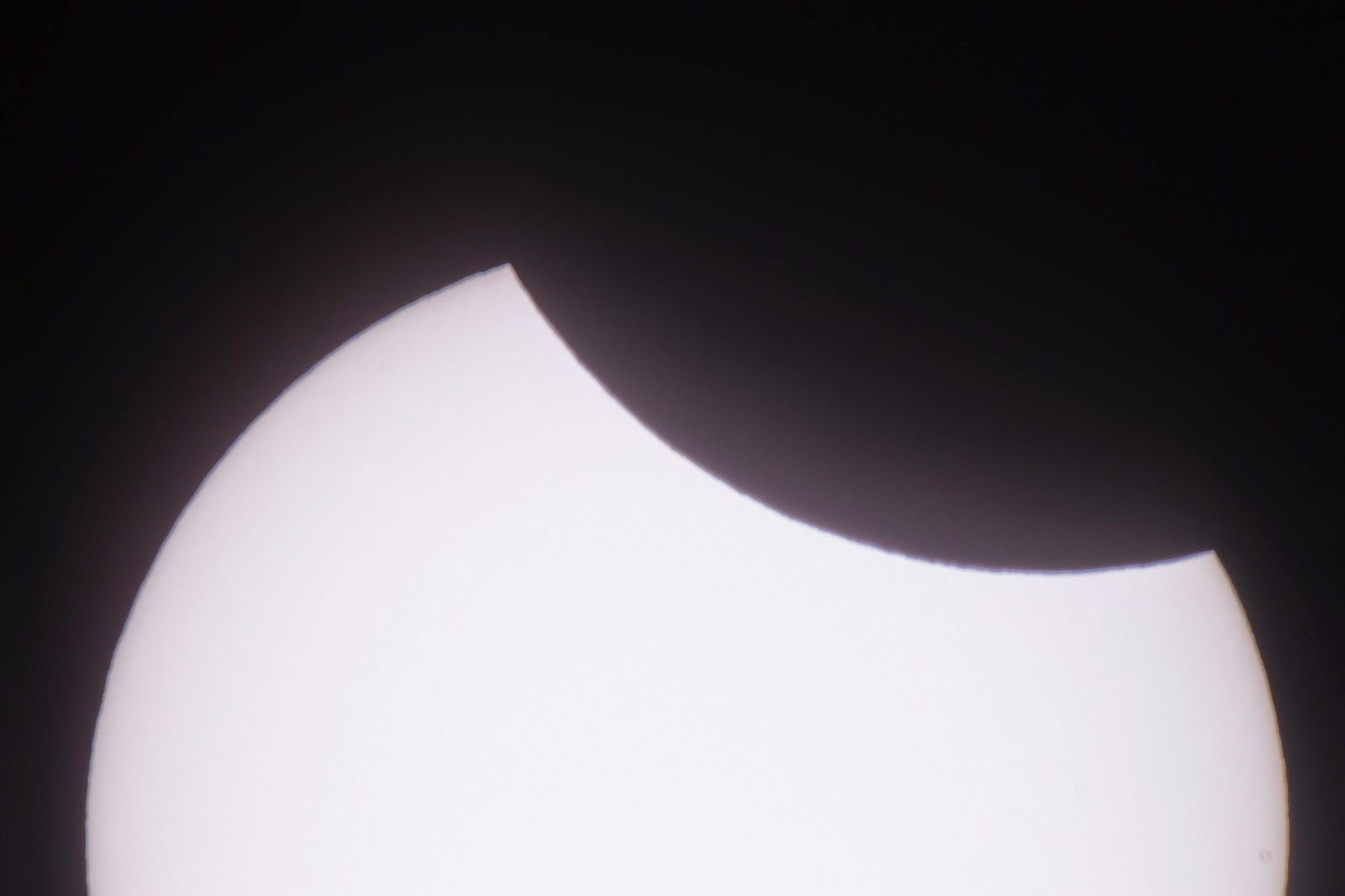 As the eclipse progressed, the moon began to cover more and more of the suns surface.  We weren't exactly sure what to expect in terms of changes to daylight etc.  I knew that we wouldn't lose complete daylight due to the fact we were many hundred of miles from the path of totality. 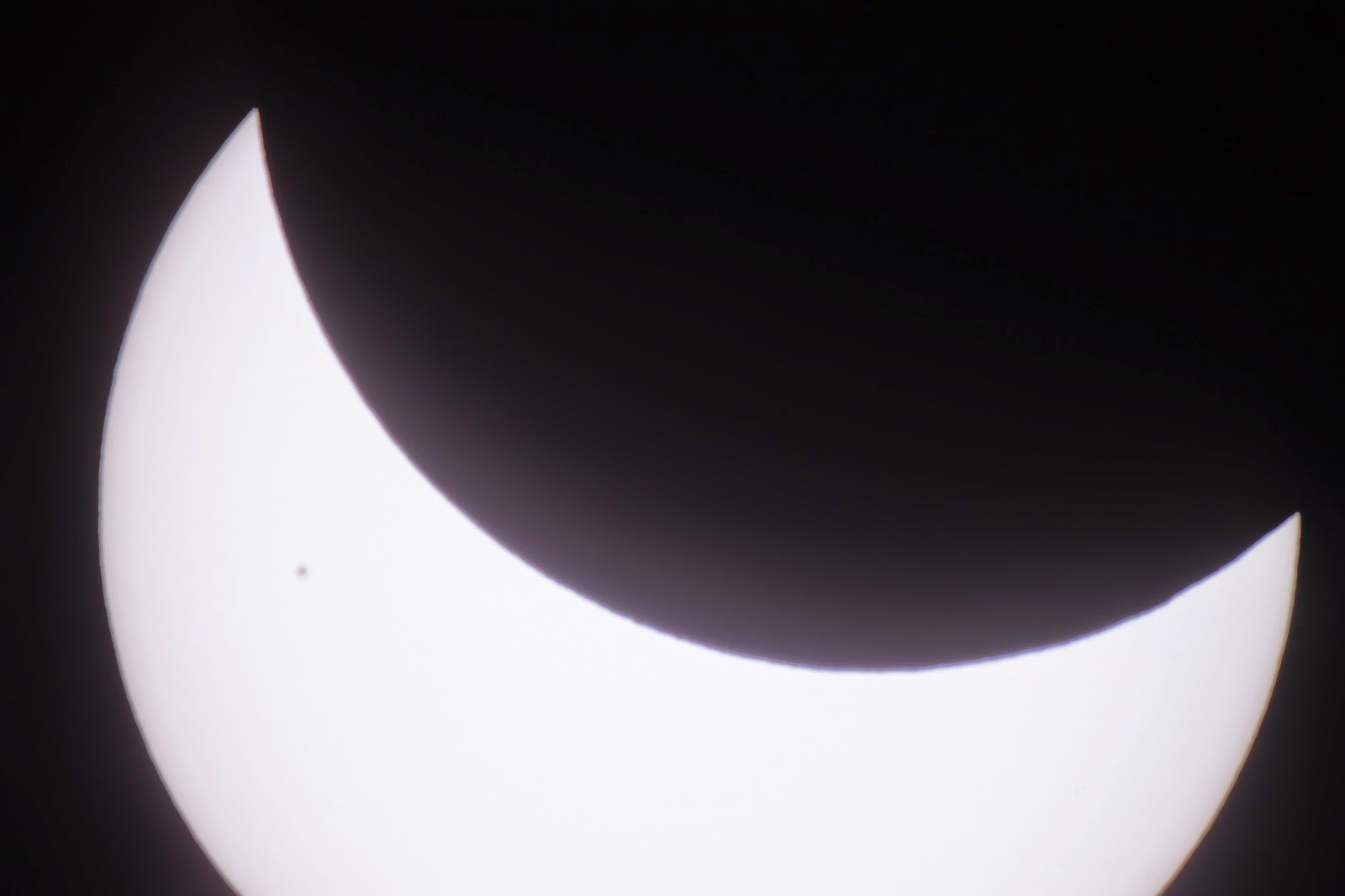 It was tricky to tell at first if the light of day was dimming.  The human brain, and the function of the eye mean that we quickly adapt to subtle changes in levels of sunlight.  In real terms, light levels probably dimmed more that we appreciated at the time.  In the image above, the progress of the alignment can be seen nicely, again with the sunspot on the surface of the sun clearly visible. 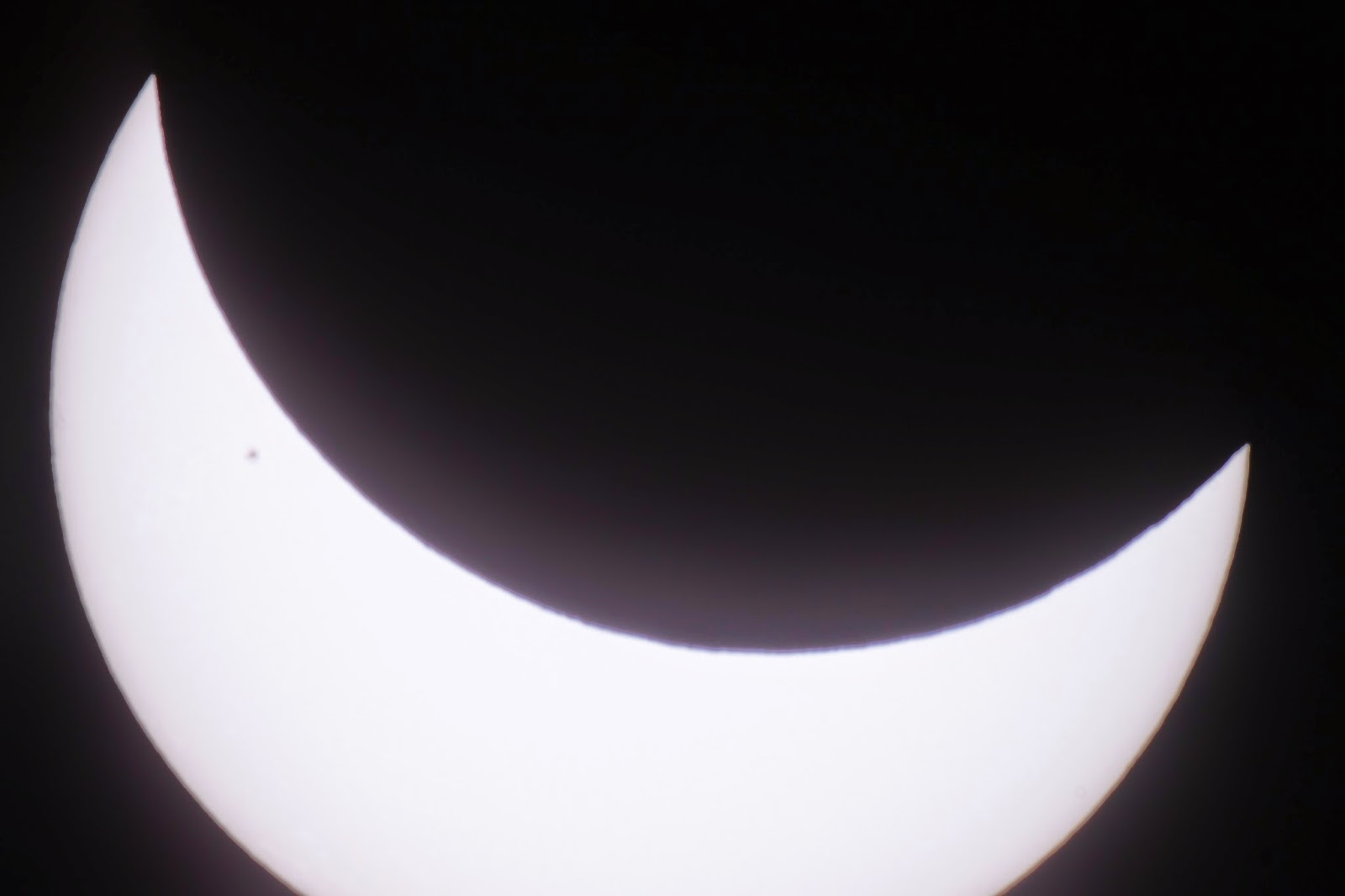 It was probably around this point in the eclipse that we could say that were certainly aware of a decrease in sunlight reaching our position.  The sunspot getting close to the edge of the silhouette of the moon.  The only real way of finding out about the true reduction of daylight would have been with the use of a light meter.  Unfortunately, I don't have one of those in my box of gizmos but taking readings would have been interesting. 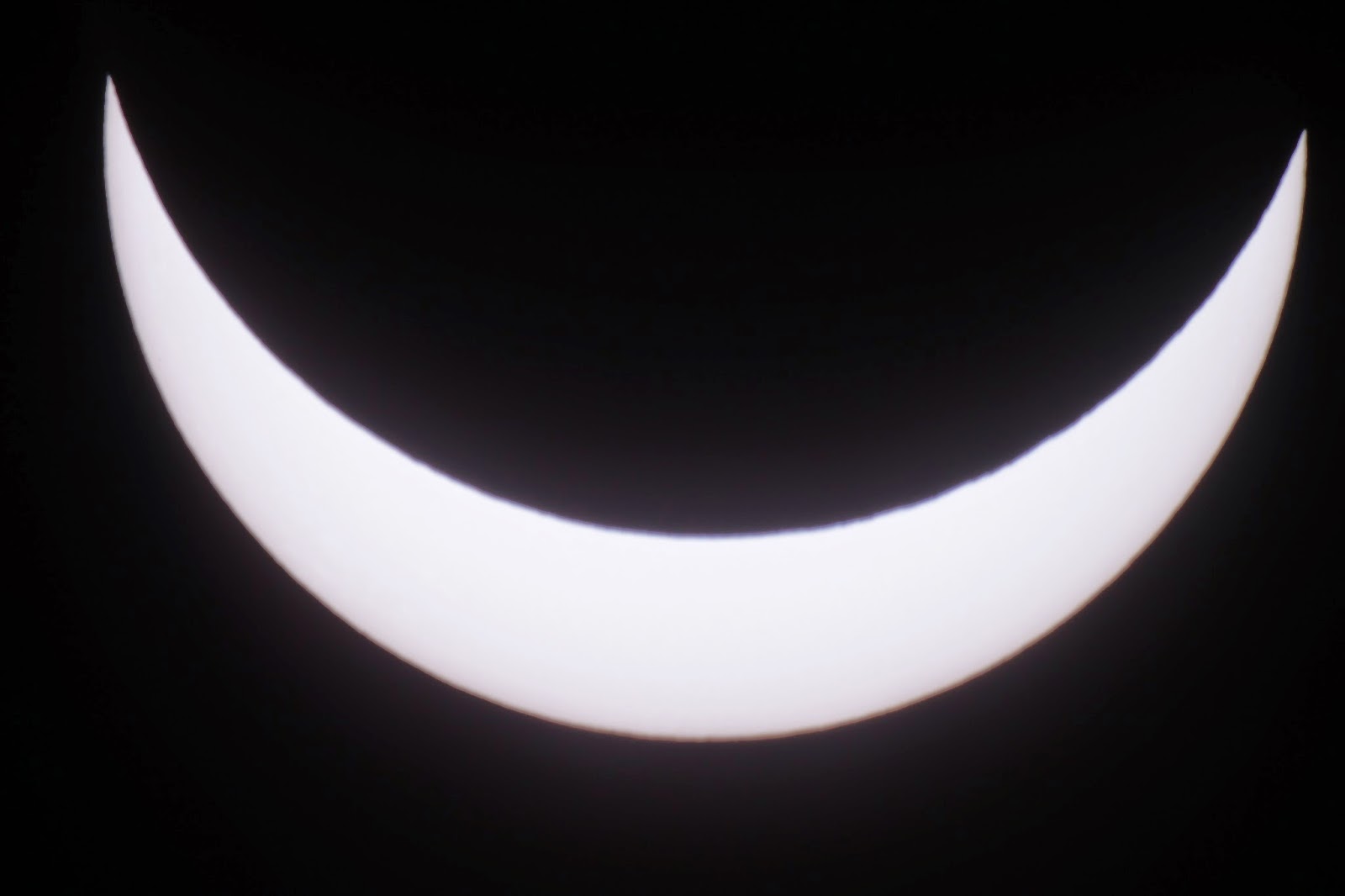 Now we see that the sun spot is fully hidden from view.  Locally, the weather had cooled quite dramatically.  I should have taken a hat and gloves really, but there you go.  As the eclipse progressed, I had to change the orientation of the DSLR in the focuser of the telescope to make sure I could fit as much of the image in the frame as possible.  Here, we can see what has been referred to in some media outlets as the smile of the sun. 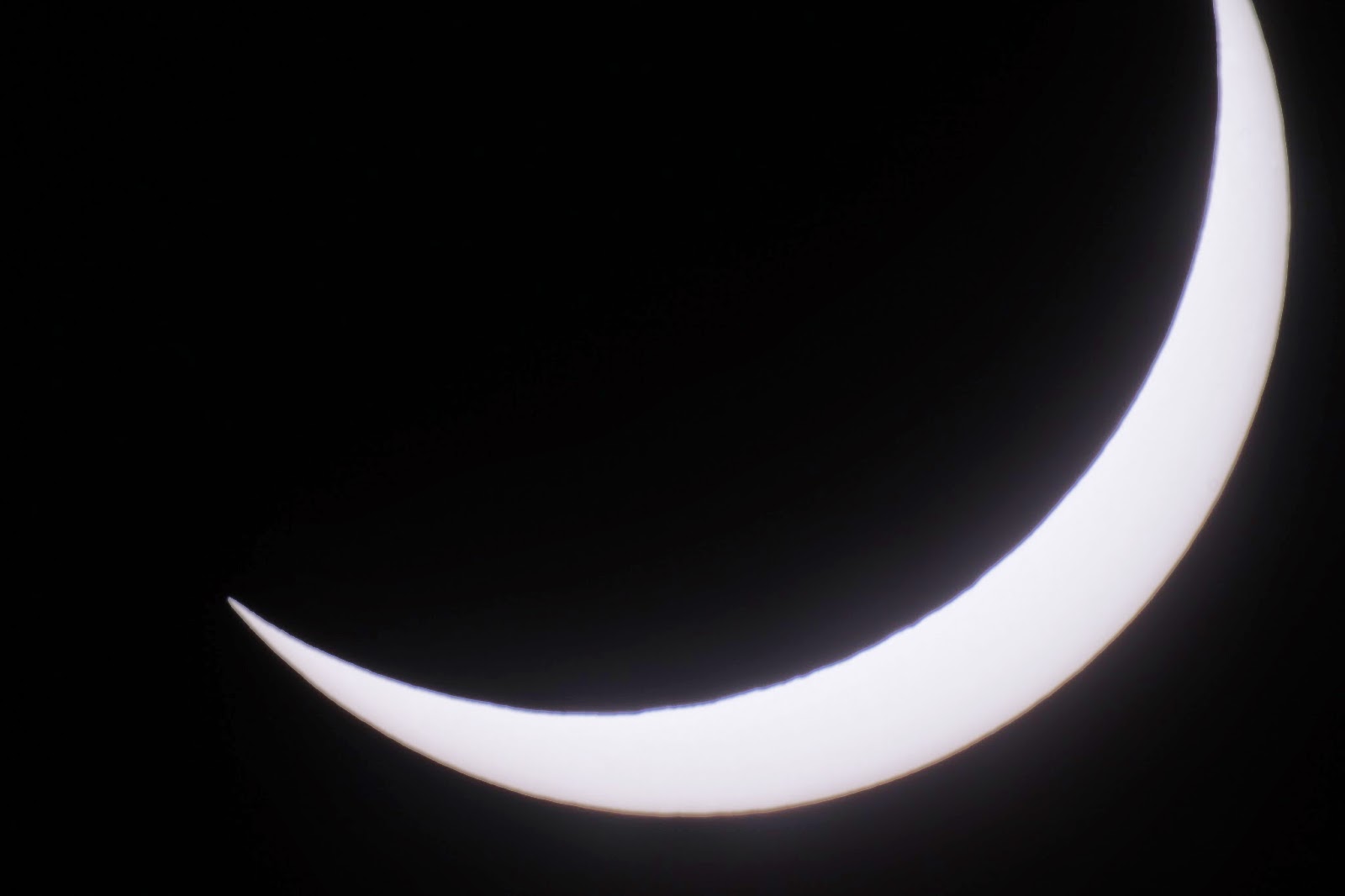 This final image was about as close to totality as we could witness from our position.  At this point, we were witnessing a definite drop in sunlight conditions, a drop in temperature and also the start of a cooling breeze.  Whilst many people would report birds flying to trees to roost and the noise of bird song disappearing, we didn't witness that.  Partly because there were no trees, but mainly because the actual level of daylight was probably similar to that of what you experience in a typical bad thunder storm.  Bird song was heard throughout. 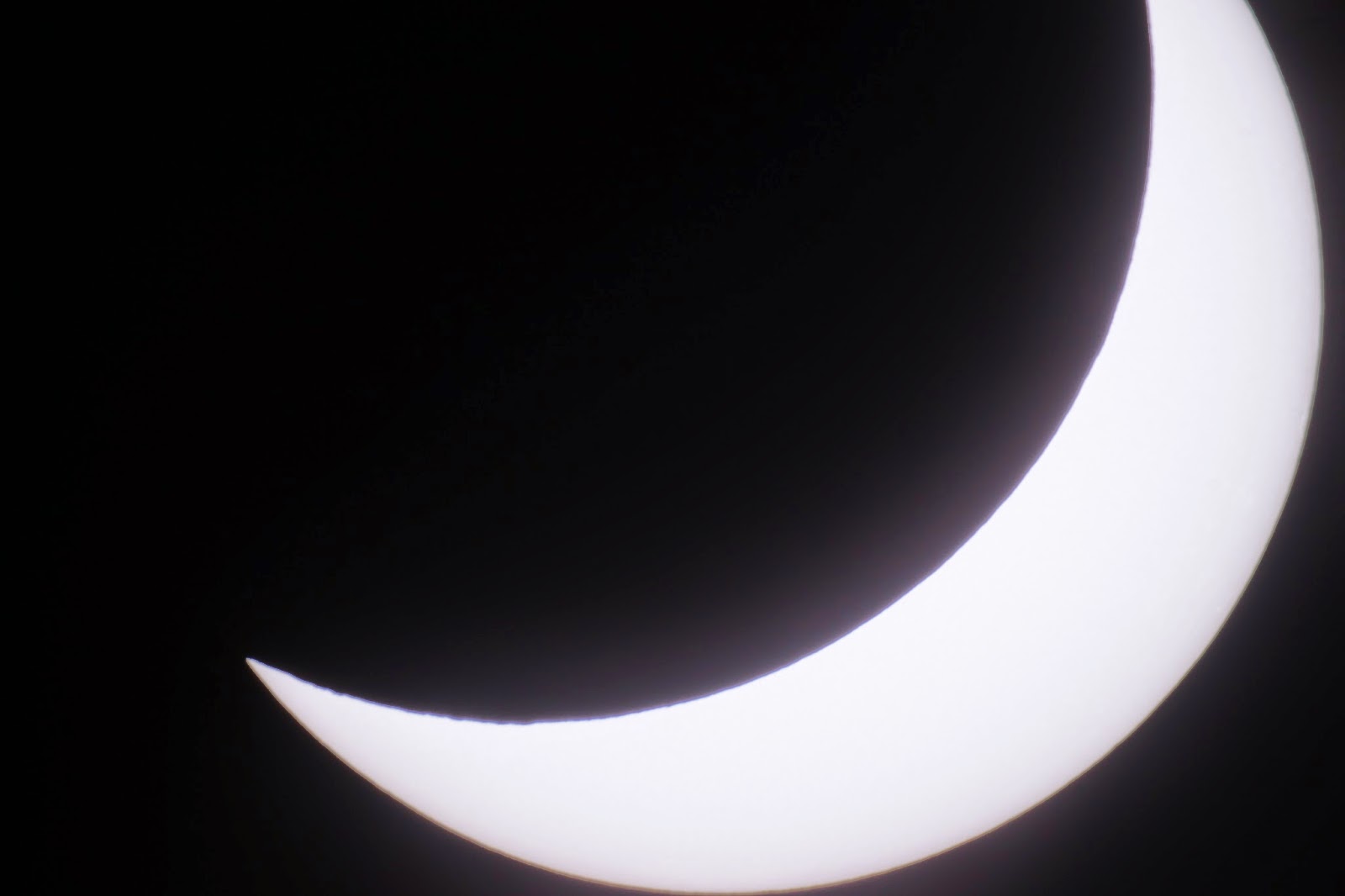 This was one of the last images of the morning as the moon began to retract its silhouette from the sun.  Overall, the experience of the eclipse was excellent and extremely memorable.  It was a pleasure to share it with Jim and the other people who came by to pay us a visit.  I will remember this for a very long time.  Back in the eclipse of August 1999, I was working near Talgarth.  Then, by some luck, I was given the day off so decided to view the eclipse from a location called Abes Mount.  I took with me my battery radio and sat against a tree trunk, listening to the radio coverage coming from the Cornish coast.  Back then, I didn't have any specialist viewing equipment, and truth be told, I think many people missed the event due to cloud.  However, there was sufficient cloud to block out most of the sunlight and I was able to observe it naked eye.  I counted myself very lucky.  Many people were clouded out totally.  That area of the Black Mountains is generally quite a special place, but events such as this make it more so.
Thanks for reading.
Labels: DSLR Hay Bluff Partial Solar Eclipse Solar Observing
Location: Hay Bluff, Brecon Beacons National Park, Hereford, Powys HR3, UK