Mini Series Part 1 - Upgrading my camera and getting spacing right.

To kick off this mini series of posts, I'm going to look at what started all this off.  Back in March, I attended the Practical Astronomy Show in Kettering, UK.  It was only the second time this show has been run thanks to the "C" word.  It's an awesome show and free to attend with plenty of vendors, talks and attendees all getting involved in this one day show.

The main organisers and primary vendor of the show are the folks at Altair Astronomy.  My imaging rig is made up almost entirely of kit from them.  Not only are they vendors, but also manufacturers of their own equipment including OTAs, cameras, filters and all the lovely little bits and bobs in between.  Some years ago, they were amongst the first to bring to the UK market a colour CMOS dedicated astronomy camera.  At the time, I was looking to make the transition from DSLR imaging to something more made for the job so I could reclaim my DSLR camera for it's original purpose.  I didn't fancy risking a mod job on my DSLR which would of meant it would of  only been useful for astrophotography.  So, I made the switch to the Altair 183c fan cooled Hypercam.  It was a big step up and helped me no end on my astrophotography journey.  But it didn't come without it's challenges.  The sensor in the camera is well know for suffering from sensor glow anomalies which require some significant processing to get rid of in the final image.  Because of these anomalies, I can probably say that my processing technique and understanding actually improved significantly, although there is still a long way to go down that particular road.  Anyway, I digress...

Several years on, a new house, a new mount and a new observatory to put it all in, and I really began to feel that personally, I was getting as much as I could out of the old 183c camera.  Technology had moved on significantly in the dedicated astrophotography world and it was time for me to catch up.  While at the PAS, I got talking to one of the people on the Altair stand and asked questions about my options for upgrading my camera.  In the back of my mind, I have a plan to upgrade several components but available funds mean that this is going to be a staged upgrade.  There's no way I can afford to do it all in one hit!  And there started the upgrade journey.... 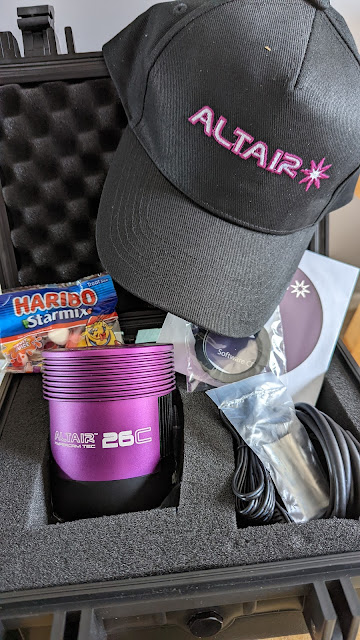 This is the first TEC cooled camera I have owned, meaning that it can be cooled down electronically to temperatures far below the ambient temperatures I would expect to encounter during a typical UK evening.  The camera has a Sony IMX 571 26mp sensor 23.4mm by 15.7mm in size.  Substantially larger that the sensor in the 183c camera.  Technically, it's quite a big step up, but a very logical progression from where I was.

A new camera also means a change to another area in the imaging train, and that difference is in the spacing.  I needed an additional 5mm of spacing.  So, what does that mean?  First of all, let's look at how my imaging train now looks.

Each component in the imaging train takes up space and each camera requires different spacing, the reason for which we will look at shortly.  The spacing required for the 26c camera from the back of the 0.8x reducer to the camera sensor is 63mm in total.  So, somewhere, somehow, we need to create 63mm between those two components.  The first 17.5mm of that spacing is taken up within the camera itself.  The distance between the surface of the sensor contained within the camera, to the flange where the camera connects to the next component is 17.5mm.  Great.  That now leaves us with 45.5mm left to find, or create.

In my imaging train, I also want to make use of filters.  To make changing filters easier, I use component 3, an Altair 2" magnetic filter drawer.  That takes up a further 17mm so we can also take that out of the total to find too, which leaves us 28.5mm left.

Those remaining 28.5mm are then taken up with a spacer, or, a series of spacers which can be seen in component 2 in the picture.  Spacers are available in a range of sizes.  Sometimes you can be lucky enough to find one spacer to fill the whole gap.  Other times, you might need to use a combination of spacers and stack them up until you make up the required space.  Or, you can do what I have done and used a combination of a fixed size spacer (12.5mm) and then a variable spacer to make up the remaining gap.  In my case, 16mm.

In brief, 63mm space required is made up of:

Why do we need spacing?

It's all well and good being told that you need the correct spacing in your rig, and then applying what you've been told, but why do we need it?  It's all to do with how stars will look across the field of view in your final image.  Focussed correctly, you should always get pretty good and sharp stars in the centre of your image, but if your spacing is wrong, you will start to see stars towards the edges of the image beginning to stretch and appear elongated.  If you have too much spacing and the camera sensor is too far from the reducer, your stars will appear stretched and almost sideways on to those stars in the centre of your image.  If you don't have enough space, the stars will appear stretched but will appear to radiate out from the centre of the image to the edge of the frame.  If you get it right though, and if all else is well, your stars should appear pin sharp across the whole field of view.

Saying all this about spacing is easy now, but back when I got my first camera, I had no idea about it whatsoever.  Actually, it was almost 3 years before I read up on it and eventually spoke to someone who told me what I needed for my specific circumstances.  That was nearly 3 years of scratching my head, swapping pieces in and out of the imaging train, swapping the order of the components and on times, heavily cropping my images to hide the fact that I had these stretched stars around the edges of the finished pictures.  For such a simple concept, it makes a huge amount of difference when you get it right.

So that about sums it up for Part 1 of this mini series.  In Part 2, we'll take a look at the next steps of setting up a new camera and imaging train after upgrading.  Until then, thanks for reading, and clear skies!