Casting my mind back over the last 4 or 5 years, I try to remember when the last time was when I imaged NGC 2244.  The answer, well, I can't actually find any record of imaging it before which I suppose means that this is my first crack at it.  Usually, images of NGC 2244 are almost purely in red in appearance, but over the last year or so, I have favoured using the Altair Quadband filter.  This, in combination with continuing to learn new processing techniques in PixInsight as allowed me produce an image with a twist.
We're currently in a run of clear nights here in Herefordshire which also coincides with February's full moon.  Usually, this would mean slim pickings for both visual and imaging with a OSC camera areas of astronomy as the moon is so bright, trying to see anything is a tough ask.  But this is where the quadband filter really comes into it's own.
NGC 2244 is in the constellation of Monoceros and remains high in the sky for a great deal of the night, and is actually the designation given to the cluster of stars at the centre of the nebula.  To be more accurate, NGC 2237 is more commonly given to the nebula as a whole.
So, onto the image itself.  This image consists of around 3 hours of data made up of 5 minute exposures.  Then on top of that, approximately another 3 hours of dark frames, and finally the flat frames used for calibration.  The subs were all collected using Sharpcap and then the processing was done in PixInsight.  I think the absolute key thing with the processing workflow for this image in particular was being able to split the image into 3 colour channels (R, G and B) and then using a feature called PixelMath to re-blend those channels in different ways and I think this is the thing which has helped me to introduce the different colours to the final image.  To be perfectly honest, it really has surprised me when I see how it turned out.
Of course, with every image, there are positives and negatives.  Unfortunately after stacking the image using the calibrated frames to produce my base image, I saw that I had once again failed to deal with the amp glow and sensor noise which appeared in bands across the very top of the frame and the bottom of the frame.  I had put so much time and effort into getting the image that far, that I didn't want to start over and try to understand why my dark and flat frames hadn't removed all the regions of amp glow and noise they were supposed to so I decided to just crop the image to help improve the image.
Without further ado, here is the final image of the nebula, and I really look forwards to having a play with this data again to try and get even more detail out of it. 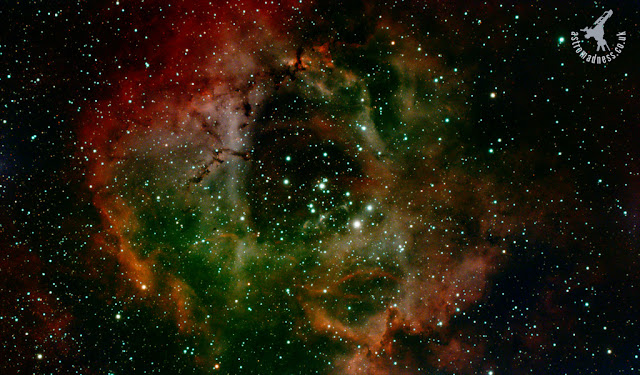