A Horse and a Jellyfish

Good day to you and thanks for stopping by.  It's been a quiet start to the year in astronomy terms because of the weather.  Here in the UK, winters tend to be wet, wet and mild, wet and cold, wet and windy or very very occasionally clear and a bit chilly.  The common theme amongst most scenarios obviously being wet.  But for a couple of nights a week or so ago, we had several clear nights during which time I managed to get the roof off the observatory and get a few hours of photon collecting under my belt.  Over those evenings, I concentrated on 2 targets.  Both are reasonably common to amateur astrophotographers, but one of them was new to me.

To kick off proceedings, let's take a look at my first effort.  The Horsehead nebula is in the constellation of Orion, and is often imaged in the same field of view as the neighbouring Flame nebula.  It's an area rich in Hydrogen Alpha, although the Horsehead itself is a dark nebula caused by what we think is a massive dust cloud in front of the dominant HA region.  As well as the Flame nebula and often overlooked, there is a third nebula in the vicinity designated NGC 2023.  This is a reflection nebula, quite small in apparent size and showing up in a blue white colour. 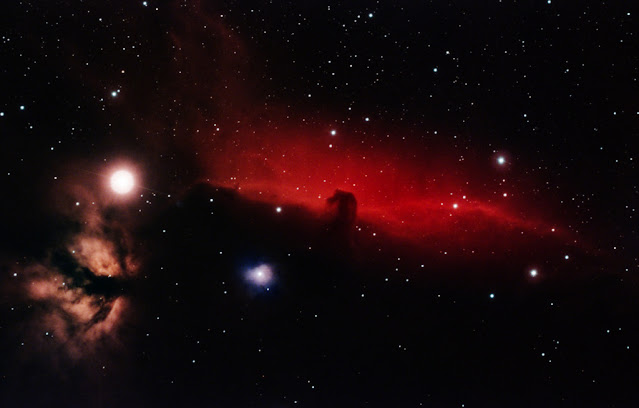 This attempt at the Horsehead nebula was a bit of an experiment (as you could argue are all my images!) where I used some new tools in PixInsight like the Game script, to try and really enhance the areas of nebulosity around the image.  This image is made up of 24 x 300 second images plus calibration frames all stacked and processed in PixInsight with some light touch ups in GIMP.

My next images are of another nebula known as the Jellyfish nebula.  This is found in the constellation of Gemini.  It's one nebula in a massive area of nebulosity visible in much wider field images of the region.  IC443 is thought to be the remnant of a supernova which occurred circa 10000 years ago, although estimates range from 3000 to 30000 years ago.
I collected the data for these images during a night of particularly good quality seeing, and when ambient temperature was around -7 to -8 Celsius.  My Altair Hypercam doesn't have any TEC cooling, relying purely on a small fan to cool the internal workings of the camera down.  This means that I can never really cool the camera down much below whatever the ambient temperature is.  Therefore, the colder it is outside, the better the individual frames are being created by the camera.
In PixInsight, I generally use the same settings for pre calibration and stacking to give me a base image to start from.  After that, my workflow is somewhat less structured.  I have one workflow which I used for my OSC processing for quite a while with some reasonable success.  In more recent times I have started to use an Altair Quadband filter in my imaging train and I have started to experiment more with RGB and different palette techniques.  I have to remember that the likelihood of me being able to produce two identical images from the same base image using an identical workflow is incredibly small.  There are so many stages and steps that are subject to on the hoof interpretation, and so many little settings and sliders to tweak along the way that I'm far from knowing exactly what I'm doing at each stage.  Fun, isn't it?  Nevertheless, I can really appreciate the difference between these two workflows.
Both these images were created from the same master image composed of 78 x 145 second images (188.5 minutes total) plus calibration frames captured in SharpCap Pro.  Again, a majority of the processing was carried out in PixInsight with some final touches applied in GIMP.

The first of these images I produced using my standard OSC process.  There's plenty of colour to work with coming through, but the background stars really illustrate how much there is going in this region of the sky. 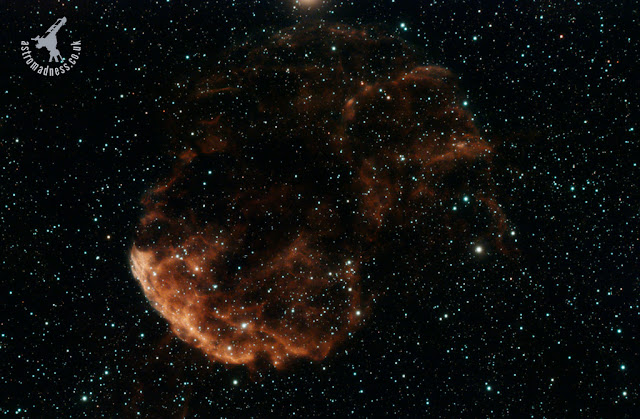 The second image is cropped slightly closer into the nebula and I have also managed to reduce the impact of the background stars (not exactly sure how though, but it'll be in the process somewhere).  I used a workflow which allows me to split the image into 3 channels (RGB) and work with them and mix them at different ratios using PixelMath in PixInsight.  I've also started to learn about some other masking techniques which I can use to help protect or expose the different areas of the nebula more specifically and enhance it.  The noise reduction steps in this workflow are also a bit different and appear to me to make a significantly larger difference.
I always enjoy my images, even if they never turn out great, but I particularly enjoyed working on the second of the Jellyfish nebula images.  Technique wise, I think it has got to be one of my best images although it's not the most stand out to look at.  I find myself looking back over the previous efforts and wanting to give them another go using the quadband filter in my newly developed workflow.  I just need the sky conditions to cooperate!
As always, thanks for reading, and clear skies.
Labels: Altair 80ED-R Altair Hypercam 183C Altair Quadband Filter Barnard 33 GIMP Horsehead Nebula IC443 Jellyfish Nebula Pixinsight SharpCap Pro