As readers of my posts know, around early January 2017, I took delivery of my very first refractor with a view of developing my interest in Astrophotography.  While I haven’t used it as much as I would like to have by now (primarily because of the weather), I have at least had some use out if it.  Enough so I feel I can now put my first impressions of the new scope to type.
So, the Altair Starwave 80 ED-R refractor.  It’s a bit of kit I first considered getting after attending Astrocamp and seeing some of my astronomy friends with their own 80mm refractors.  But I didn’t know which I would like to get for myself.  I come across the initial Starwave 80 ED during a visit to Astrofarm in France where I also met Andrew who was able to show me his and demonstrate it’s capabilities.
By the time I returned to the UK and decided on the fact that the Starwave 80 ED would be a good choice for me, I couldn't find one anywhere.  They had been replaced by the 2016 80 ED-R version instead.  After further deliberation, I decided to bite the bullet, and go with the latest version, assuming that the new scope wouldn't be a backwards step.  I ordered the new telescope along with a 50mm guide scope package from my regular astronomy retailer, Tring Astronomy.  The boxes arrived in good time as arranged.  It was time to get stuck in. 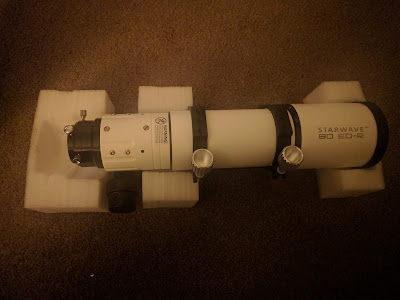 Mt first impression was that it’s a solid piece of kit.  It’s well manufactured and finished extremely well.  A very gentle shake (always a good test!) suggested that there was no movement in any of its components.  Nothing loose or rattling.  I was slightly disappointed at the point of ordering the scope to learn that a case was not included for this refractor.  The cardboard and foam packaging won't last too long in damp late night observing conditions, so it is worth considering the extra expense that will be required to buy or build a suitable case.
Once out the box, one of the first jobs to do is to locate the small mounting plate for attaching a finder scope, and attach it to the scope.  It's quite easy, just a couple of hexagonal bolts which are already in situ in the side of the scope are all that are needed.

Before I could do much else, I needed to put the scope onto a mount which would then allow me to get a proper look at it.  The scope came mounted in it’s rings and with a dovetail bar attached which meant that I could get it on the mount straight away.  In that sense, it was ready to go straight out of the box.  Very simple, very easy.
The telescope comes with an short extendable dew shield with is pushed out and held in place by friction.  Although, after several times of setting this scope, and then packing it away again, this is becoming a little loose.  However, there are 3 small grub screws in place that can be turned slightly to help the dew shield stay in place.  I will need to remember to loosen these off each time in case they start to mark the tube of the refractor over time.  An excellent touch is the cap for the scope.  One of my reflector telescopes came with a plastic cap for the end of the tube which was fine.  But the dobsonian telescope come with a shower cap style cap for the secondary end.  It’s inevitably going to get lost or torn at some point.  But, the cap for the refractor is a really snug fitting metallic cap which fits really well.  It doesn’t take too much effort to remove it, and you certainly don’t need to give it a series of sharps taps to put it on.
At the other end, the focuser is smooth as they come.  My other two scopes are reflectors.  One has the factory fitted Crayford style focuser and the other has an upgraded dual speed focuser.  Both very capable and suitable focusers.  In terms of focus action though, this rack and pinion focuser is so smooth.  It is dual speed for the fine-tuning capabilities oh so very important to astrophotography.  There is also a small thumbscrew under the focuser to lock the focus into place, critical for imaging.
Staying at the focuser end of the scope, the 80 ED-R comes with a 2” to 1 ¼” adaptor for eyepieces.  To start with, I only wanted to use the new scope for photography, but I soon decided that it would be better to use it as a travel scope as well as for AP, and therefor would also need a 2” diagonal as an add on.  As I found, this was also required to achieve focus with an eyepiece in place.
My attempts at astrophotography involve me using my Canon EOS 1100D DSLR.  When I bought the refractor, I also bought a reducer to use in conjunction with the DSLR.  Fitting the DSLR with reducer and adaptor is all very straight forward.  I use Backyard EOS with my DSLR to help construct imaging runs.  The software has a focus guide that can be used in conjunction with the live view functionality with the camera.  When I have used this in the past with the reflector telescope, I could get the focus value down to around 6, the idea being the lower the number, the sharper the focus.  At first light with the new scope, I achieved the best focus I ever have, with a value of around 2.4.  This must be testament to the optics in the refractor.  My first test sub frame take with the scope was extremely sharp.  I used the DSLR at a relatively high iso so I could get some instant results, but I was in no way disappointed.  Though quite ‘noisy’ in general, (a limitation of the cameras performance as opposed to the scope) the image was crisp to the edge of the image.
The telescope comes with a fitting for a finder scope if you wish to use one.  However, along with the 80 ED-R, I also bought a 50mm Starwave guide scope kit.  This kit comprises of a 50mm aperture, 200mm focal length guide scope and Altair’s GPCAM mono.  The guide scope comes with it’s own scope rings and mounted on a guide stalk.  This fits directly into the finder scope mount on the main telescope. 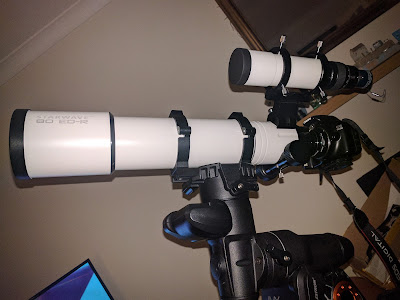 It was at this point, I found the only minor problem with the purchase.  If the guide scope and camera are mounted onto the 80 ED-R in the suggested fashion, and then a DSLR is attached to the focuser, the whole ensemble does not balance on the mount.  There simply too much weight present on the focuser end of the rig.  Loosening off the clutch on the mount just sent the whole scope spinning around until scope pointed up in the air and focuser towards the ground.  I had to look at options of how to combat this issue.  I needed to get some of the weight further forward towards the dew shield end of the scope to try and achieve a better balance.
By looking around at picture on other users set ups, I could see that a more popular way of arranging a guide scope to work with a telescope is to piggy back the guide scope onto the back of the telescope.  Fortunately, I had a spare dovetail bar, and I could drill some suitable holes in it.  The new holes allowed me to piggy back the spare dovetail bar to the scope rings of the 80 ED-R.  Following from there, I could also then attach the scope rings for the guide scope.  All of this means that the weight of the guide scope kit at least is distributed further forward and along the length of the telescope.  It still doesn’t balance perfectly, but it much better that it was.

So, they are my first impressions of this impressive piece of hardware.  It's my first refractor, so I have nothing to compare it to in terms of refractor optics, but I am really pleased with the purchase.  Now all I need to do is get out there and use it more!