Converting My Pier for the AVX.

A couple of years ago, in an effort to speed up the amount of time it was taking me to set up my Skywatcher EQ 3/2 mount, I went through the process of designing and building a pier for use in the back garden.  I documented the build process on the DIY Astronomer page of this site.  The process of designing and building the pier was good fun.  Something I could really get stuck into and would keep me amused during my spare time.  I did use the pier for a while, and it proved to be a great success, decreasing the amount of time it was taking me to set everything up by quite some margin.
But - there's always a but - when I took delivery of the 300p dobsonian, I found myself using that more than the 150p, and so the pier eventually went unused for over a year.  That was until I went ahead a bought my first GoTo mount, the Celestron AVX.  Soon, I found myself back going through the same process of setting up a tripod, getting everything leveled and polar aligned.  In other words, back where I started with the EQ 3/2 mount.  My latest ventures have seen me taking steps towards bringing together a reasonable low-end astrophotography set up.  This is very time consuming, so any time saving tricks I could take advantage of are very helpful.  There was nothing for it.  It was time to breath life back into the pier, see how it could be adapted, and start using it for the AVX mount.

Where I Needed To Be.

The AVX mount has different dimensions to the older EQ mount.  Obviously, coming from different manufacturers, the measurements were all different.  First of all, I checked to see how far off the existing set up was from being usable.  I found that the AVX mount wouldn't fit into the top plate in the same way that the Skywatcher mount did.  The hole was too small.  Initially, I considered taking the plate back to where I got it from, and then ask them to make a new one with a bigger hole.  However, this would only solve part one of the problem.
The design of the AVX mount meant that if I had merely substituted the top plate out for one of the correct size, the mount itself would sit too low on top of the pier, and it's range of movement would be inhibited by the corners of the top plate.  I needed to not only have a hole of the correct diameter for the AVX mount to fit into, but also raise the height of the mount by approximately 40 mm so the counterbalance bar wouldn't make contact with the top of the pier.
The solution was already out there in the form of this pier adapter sold by Altair Astro.  But at nearly £80 at the time of writing, plus delivery, it was quite an expensive purchase to address the problem.  Again, not for the first time, I turned to the forums for help, and found loads of ideas.

How I Got There.

Through my research and reading, I come to the conclusion that what I needed was a brake disc.  All I needed to do was measure the size of the whole that I needed for the AVX to sit into, and remember that I needed to raise the height of the mount up by that crucial minimum of approximately 40mm.  A quick web search was able to provide me with a catalogue of brake discs and their full dimensions.  It was just a question of working through the catalogue until I found one with the correct height and size hole.  As it turns out, a 1995 1.4 Ford Fiesta was the correct one for me to use, and I could take delivery of a pair of them for around £16.  Much cheaper than the purpose built option from Altair Astro, and I would have a spare in case something went wrong.
I took delivery of the discs a couple of days later and set about offering one up to the top plate of the existing pier head.  I established that I would need to cut out 4 sections from the disc to allow it to sit flush on top of the existing plate.  Then simply drill and bolt the disc into place.


The first fix and initial cutting and drilling completed, I was able to start looking at how much adjustment was needed on the middle plate.  The height of this needed to be changed so I could fit an M10 size pier anchor bolt up inside the pier head, but also have enough available to screw into the AVX mount itself.  Adjustments made, it was time to offer the AVX mount up once again to check everything was correct.  I spent some more time making sure everything was level and then tightened up all the fittings.
I still had the alignment peg to fit.  It's tricky to do this during the day.  The old alignment peg was always a little bit off I felt, so I didn't want to rely on that as a guide.  I decided the best option was to make an initial mark on the brake disc showing magnetic north, and then to wait for a clear night where I could see Polaris through the finder scope hole of the AVX.  Once aligned like this, I could make a few more marks, and return in the day light to drill the hole for the peg and fit it into place.  Another couple of coats of paint, and the new pier head was complete.

The newly adapted mount was now ready to take the AVX. 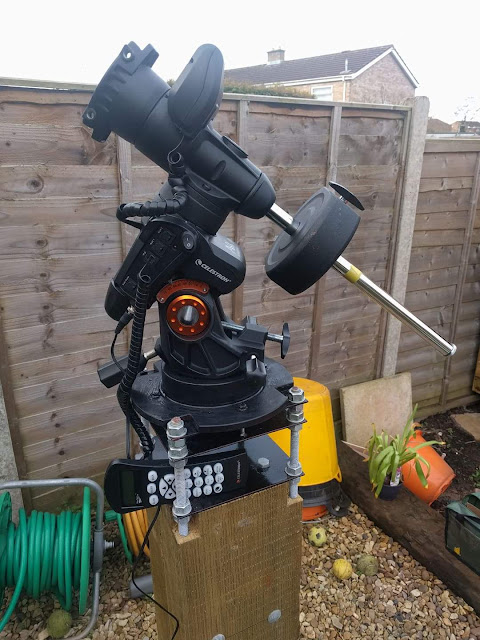 There are a couple of new modifications I could make to the pier now.  The most notable and useful will be a holder for the hand controller of the mount.  For the time being though, it can just rest between the top plates.
And there you go.  Thanks for reading, and Clear Skies!