I hate to say it, because every year, the arrival of Christmas sneaks up on me quicker and quicker, but, tonight, the heading of this latest blog post is quite apt.  We went to a 'meet the author' event in the Savoy Theater in Monmouth where we listened intently to the author of the two books, You Are Here, Around The World in 92 Minutes and An Astronaut's Guide To Life On Earth.  The author in question, Colonel Chris Hadfield. 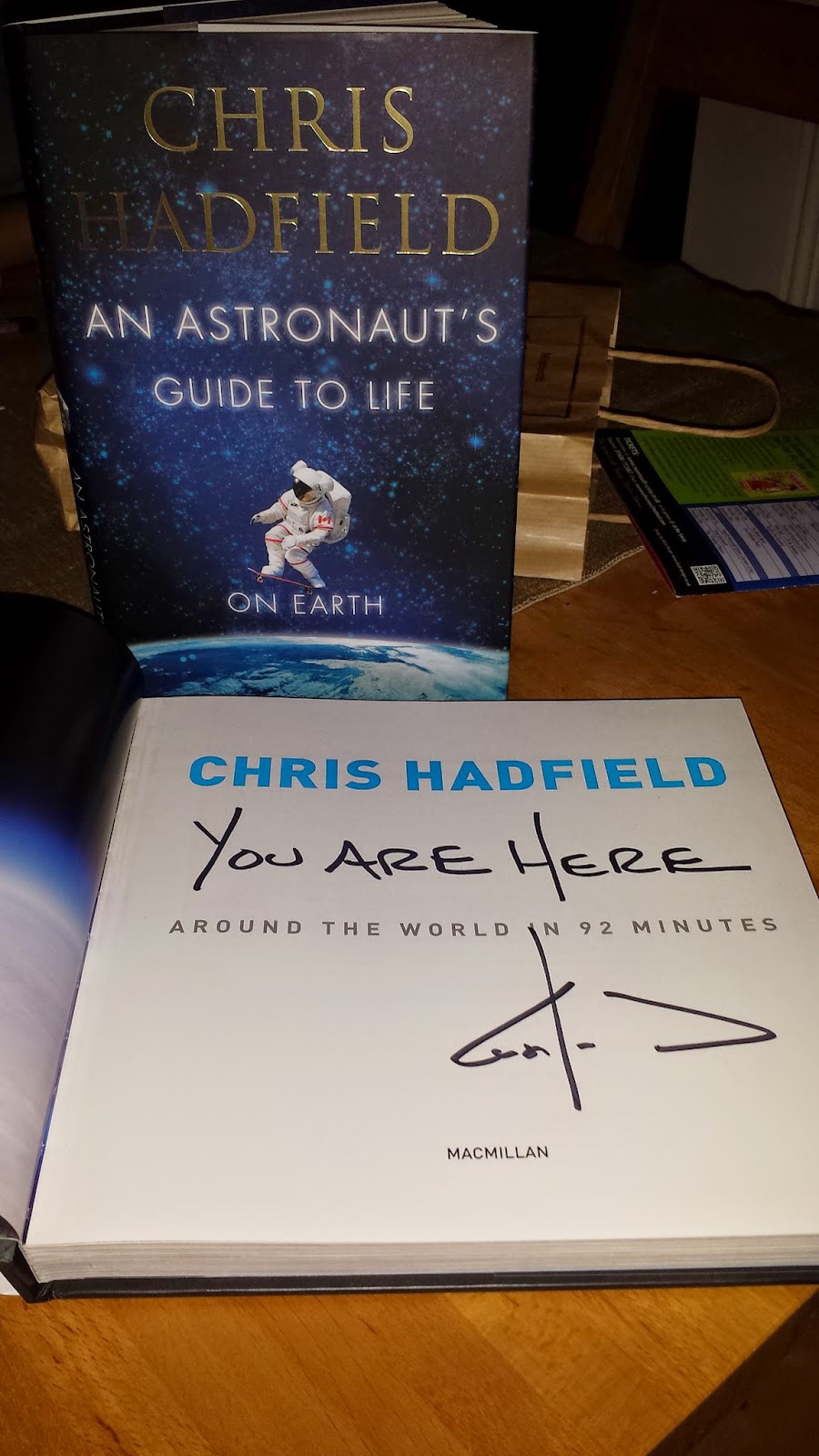 The theater was full, every seat taken by people of all ages.
The structure of the talk was quite simple.  Prep and countdown to takeoff, getting into space and what to do while you're there before finally, returning to Earth.  The talk lasted for around an hour, but the amount of topics covered was massive.  His descriptive nature of all the areas was brilliant.  To be able to communicate with a wide variety of people on such a level of understanding of the subject matter and maintaining their interest is an art in itself, and it must be said, that as a speaker, he has mastered that art.  His explanation and description of the takeoff sequence and launch was brilliant.  Not only talking about the technical aspects of launch, the fuel in the rockets, how long each phase lasts for and so forth, but the physical description of what the body goes through during that flight into orbit was brilliant.
The finer details of the facts and figures I will leave to the reader of his books and the wealth of information available.  However, to hear it first hand, from someone who has experienced it for real, not once, but 3 times, is special.
The stories told of what goes on whilst on the ISS give us a small sense of what life is like.  The experience of weightlessness and the comfort of sleeping whilst in orbit sounds incredibly relaxing, and the source of some humor apparently too as Chris recalled the sight of people fast asleep, but floating through the ISS because they had fallen asleep before attaching themselves to their sleeping pod wall.  In the second part of the talk, he took questions from the floor.  Questions such as, 'How hot is the flame that comes out the bottom of the rockets at take off?' 'What's your favourite part of the ISS other than the glass window commonly seen in photos?' were dealt with with ease, humor and interest.  However, two of my favourite questions that came from the audience came from two children.  The first asked what it was like getting back to Earth and gravity after spending so long in orbit.  With the help of another child invited up onto stage, Chris went through the skeleton of the human being describing what is where and why, but then how it all changes and relaxes when in space.  It was a good lesson in astro-physiology, if there is such a thing!  He spoke about the muscle loss, bone density loss, the weakness of the heart and even down to the softening of the skin on the soles of your feet.  Then, he moved on to what happens when you return to Earth and the effects of gravity.  The nausea, sickness, tiredness, dizziness and balance problems all explained in simple detail.
Perhaps the biggest reaction of the evening, and probably the most impressive response came from the second question.  The question was along the lines of, 'What's the most beautiful thing you saw in space?'  It was at this point that Chris returned to his laptop to bring up a photo that was truly breathtaking.  His description started off by talking about spacewalks, which astronauts need to undertake to maintain and fix external parts of the space station.   During a single orbit of the Earth taking 92 minutes, the ISS sees a sunrise and sunset every 45 minutes.  It was during one of the periods of darkness that he took the time to switch off all the lights in his space suit so he was in total darkness.  Then he changed to the next photo.  The ISS was traveling in the Southern Hemisphere, and the photo now on display to the audience was the most stunning picture of the Southern Lights (Aurora Australis) spread under the ISS.  The greens were incredibly vivid, and the blues visible in vast curtains of colour.  But that wasn't all.  The camera picked up alot of the colour, but not all of it.  Missing from the photo, but superbly described were the vibrant reds and purples of the aurora as the ISS didn't fly above the aurora, but through it.  Incredible.
The hour soon flew by and soon, the talk was over.  I heard many people say that they could have stayed and listened to him for many more hours.  I am indeed one of those people.  I also heard one woman say that she learnt more about science in 60 minutes by listening to Chris Hadfield than she did in 7 years of school.  That says something.
To wrap it all up, he performed an adapted rendition of the Bowie cover that brought him YouTube fame, Space Oddity.


I feel privileged to have had the chance to be in the presence of such a human being, and something that I will remember for a very long time.  If you get the chance to go, I urge you to do so.  You won't regret it.
Labels: Chris Hadfield Commander ISS Space