Hi there.  Just a quick post for this subject.  It's been a while since I have managed to get any new data because of the weather, but eventually a couple of weeks ago, I managed to get a few hours on these nebulae.  But then I ended up sitting on the data for another week or so before I managed to get time to process it.
So, these nebulae can be found in the constellation of Cassiopeia next to the bright star, Gamma Cassiopeia.  As you look a the constellation, Gamma Cassiopeia is the middle star in the "W" shape.  IC63 and IC59 are both reflection and emission nebulae, reflecting the light off the bright start in the image.  It is thought that Gamma Cassiopeia emits 34000 times as much energy as our own Sun.  (Source: hubblesite.org)  IC59 (lower right of centre) reflects less in the HA wavelength, hence the more blue appearance.  These nebula are around magnitude +10 so are quite dim, although they should be visible with a good UHC filter in medium to larger telescopes though the brightness of the nearby star might make observing tricky. 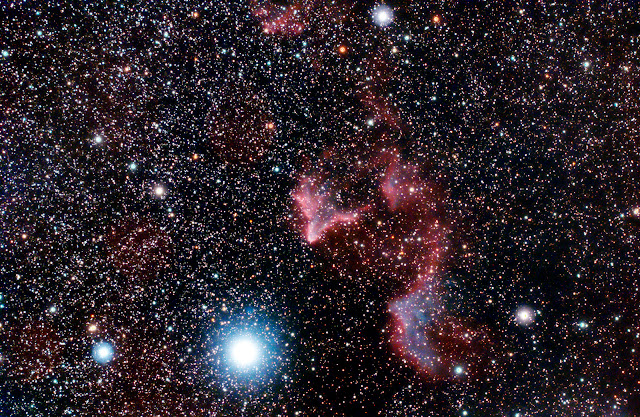