I can trace my interest in astronomy back to when I was growing up in my earliest years.  I remember Dad’s refractor telescope set up in the spare bedroom of our house in Swansea.  At the time, it intrigued me, but unfortunately, I don’t remember ever spending time at the eyepiece with him.
Living in a city didn’t really lend itself to astronomy or observing too much, and back in those days, it was still relatively inaccessible as a hobby.  Not like these days where it’s more affordable, and the quality of the optics are generally excellent.  I bought my first telescope about 4 or 5 years ago after much deliberating and research.  It felt like the biggest purchase I had made at the time and at last, I was able to fully understand why Dad had enjoyed his telescope all those years ago.
Around 3 years ago, Dad was diagnosed with cancer, and I don’t know why, but it spurred me on to get involve with astrophotography.  Looking back, I think it was a way that I finally could share my view from the eyepiece with my family and friends, but especially with Dad.  From the beginnings using my DSLR camera, to my current set up using a one shot colour CMOS camera, I’ve been able to produce more images to show him as time has gone on.
This Christmas, Dad and my step mum contributed significantly to the cost of a license to the processing software, PixInsight which I had come across follow an Astro imaging course.  This software helped me raise my imaging game by allowing me to make even more of the data that I was managing to collect.  It was something that Dad was able to see the results of almost straight away.  I was able to rework some old data, and had a couple of opportunities to collect new.  I was able to show Dad images of Orion, the Flame Nebula, and The Elephant’s Trunk Nebula along with The Crab Nebula.  He really liked them, and later, I found that he would happily be telling his friends of my interest and my results.
This winter has been particularly poor for astronomy, but I did seize the opportunity one night in early February to get out and collect data on 3 targets.  One of those targets was the spiral galaxy M33, but I had a problem.  For some reason, I was getting some sort of light interference on the sub frames, which showed up significantly on the final image.  After trying to figure it out for myself, I did a bit of reading up, asked a few questions on some forums and got some things to try.  By this point, several weeks had passed by, but I managed to get some of my best final images from that data, that I have produced so far.
Soon after, Dad was admitted to hospital.  He had contracted an infection which on its own was easily treatable with antibiotics.  However, Dad’s cancer had also become more aggressive, and by the time the infection was under control Dad was incredibly ill.  Dad lost his fight with cancer on 27th March 2018 and died at home.
Sadly, I never got chance to show him my latest images particularly this one of M33.  I appreciate that there are probably much better or clearer images out there of it, but this one is mine and I am very proud of it.  This image will always mean more to me than any other that I have taken in the past, or will take in the future.  Dad, this one is for you.
Antony x 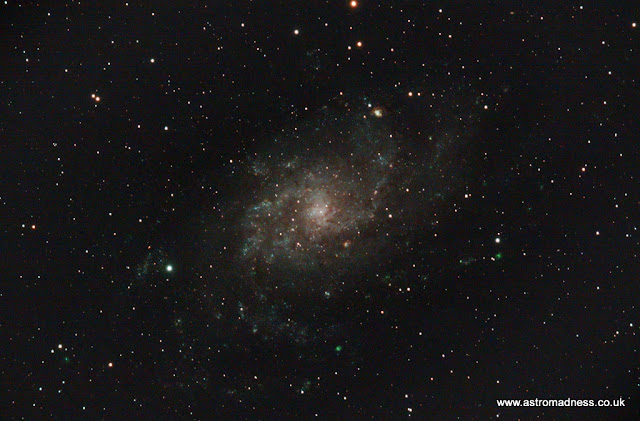