Astronomy Lite.  It sounds like some sort of freebie version of a paid for app you'll find in the Google Play Store.  People who attended this Autumn's camp will know exactly where I am coming from on this one!  If not, you will read what I mean soon enough.
I was hoping to try out a video blog for this camp, but to be honest, I wasn't very good at it.  Most of it ended up on the cutting room floor, and what was left isn't worth the effort.  Good job I can still type, albeit with the occasional spelling and grammar issues.
On the run up to this camp, social media was buzzing with activity.  And from this, I could see that a fair few of my friends were already there ready to experience the uber dark skies of Cwmdu,  As it turns out, Thursday was to be a perfect night for astronomy.  I had a choice on my hands.  Pack the van and rush straight to the campsite after work, or set up at home and enjoy the opportunity to stay up as late as I wanted... 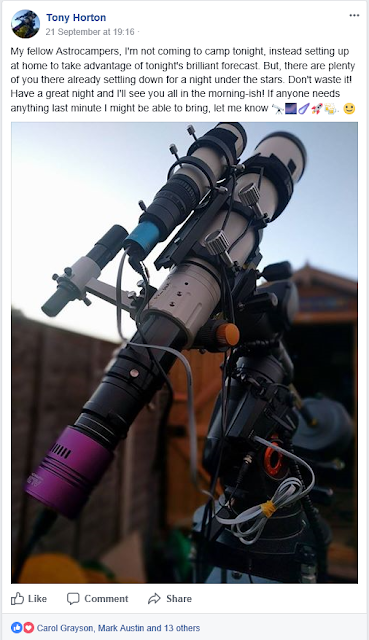 After an awesome night out under the stars on Thursday, I left for camp on Friday, excited as ever and looking forward to meeting up with friends old and new.
If you've read my blog post on the Spring camp, or have been keeping tabs with the Awesome Astronomy podcast, you'll know that the newly installed LED street lighting through the village of Cwmdu has caused a large amount of controversy.  Following some excellent work by the Astrocamp team, plus the local councillors and Welsh government, we received some brilliant news about the lighting.  The results of which meant that an agreement was put in place to permanently dim the LED lighting by approximately 30% through the village and beyond into the National Park.  Not only this, the organising team of John, Ralph, Paul and Damien received word that the street lights across the bottom boundary of the campsite would be switched off at night, improving the situation further.  When I got to Cwmdu, this is what greeted me as I drove through the village.  Result! 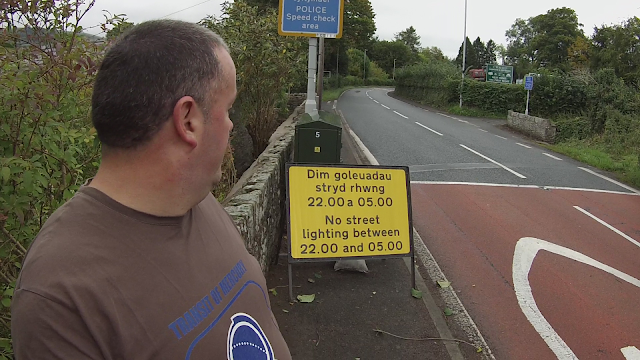 But as they say, the proof is in the pudding.  Things didn't go entirely without a hitch.  Apparently, the lighting was also switched off on Friday night, before camp started.  It's just that it was the wrong lights.  Due to, shall we say, an administrative error (although who's is a closely-ish guarded secret!) lights at the other end of the village were switched off.  Nevertheless, a couple of phone calls later on Saturday night, and the correct lights were switched off bathing the whole campsite into inky blackness!  Awesome!
Still buzzing from the night before, it was a time for an overdue catch up with some friends from previous camps.  Astrocamp has a much deserved reputation as being an extremely friendly star party.  One most certainly for the beginners and the more advanced astronomers alike.  This is what attracted me to Astrocamp in particular, and thanks to it's unique atmosphere, I have made so many friends and looked forward to meeting them all again.  Friday night, the weather was a bit rubbish to be fair, but that left plenty of time to nip down to the Farmers Arms and catch up over a couple of beers and steak and ale pie.
Saturday morning, and with fellow astrocampers starting to appear on site and set up their tents, I saw yet more familiar faces coming together ready for the weekends events.  Despite the weather forecast being iffy, people optimistically started putting their scopes out on the common ready for any chance of some communal observing that became available.  This of course, included the cornerstone of the common, Bob the Dob! 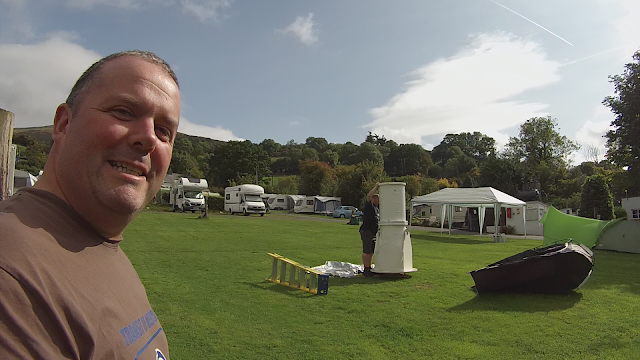 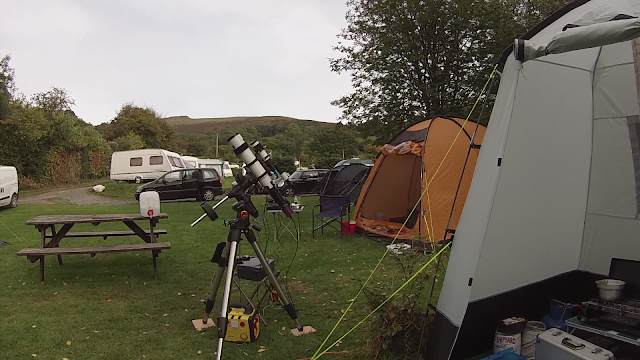 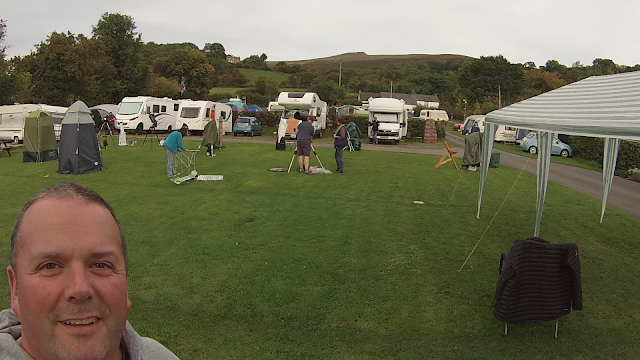 It was during this afternoon, that I met the remainder of my new astro neighbours.  Carol, Karen, Karen, Callum and Mark were around me, and it has to be said, I really couldn't have wished for a better set of neighbours at camp.
So, the astronomy itself.  Following the meet and great on the common, people carried on getting acquainted with each other before darkness began to fall.  This was to prove to be the best night of camp for astronomy, even-though stars were only visible between gaps in the cloud as and when they happened.  Personally though, I had everything set up ready to do some imaging.  This didn't prove to be a wise idea though.  As I could hear people on the common talking about things they were able to snatch a glimpse at between the cloud, I was left frustrated, unable to polar align my mount and with no chance of doing any sort of guiding.  On more than one occasion I was heard to mutter 'should have brought the dob'.  Bad decision.  I'd left the SBT Dob tucked up in a blanket and cover back at home.
Sunday.  A highlight of camp.  A day which was lined up with solar SUNday in the morning, before an afternoon at the Spiral Arms.  Unfortunately, the weather was up to its normal tricks so there was very little opportunity for any sort of solar observing.  We did still have the part of camp where the weather could do what it liked.  The Spiral Arms, the Pub Quiz, a talk and the Masters of the Universe quiz. 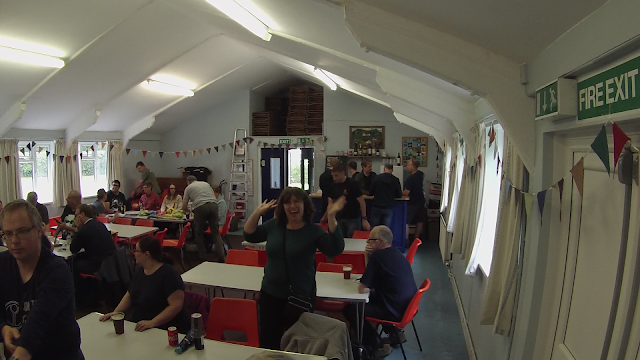 The quiz is a personal favourite of mine, and though I have yet to be part of any winning team, I take immense pleasure in watching the prizes given out.  These are not ordinary prizes, and one prize is not always expected...  First prize went to a team of seasoned astronomers.  The prize was a brand new Altair 70 ED telescope and mount.  But how would a group of people make use of the first prize.  Well, this is a testament to exactly how friendly a star party this is.  An example of peoples willingness to help others.  An example of generosity.  The members of the table agreed to put names into a hat and a draw made for the ultimate winner of the scope with some selflessly not putting their name forwards, the draw was made, and the winner was left holding the prize.  In a mad series of coincidences, my astro neighbour Carol had been looking at my equipment the day before and had even showed me a screen shot of a picture I had posted on Facebook before camp.  She had been looking at it with a view of finding out a bit more about it and was stunned to find that I then set up that same set of equipment next to her when she arrived at camp.  Carol had said that she was looking to get something similar, and the previous evening we spoke about different combinations and what her possible options were.  Spooky then that Carol was left holding the prize! 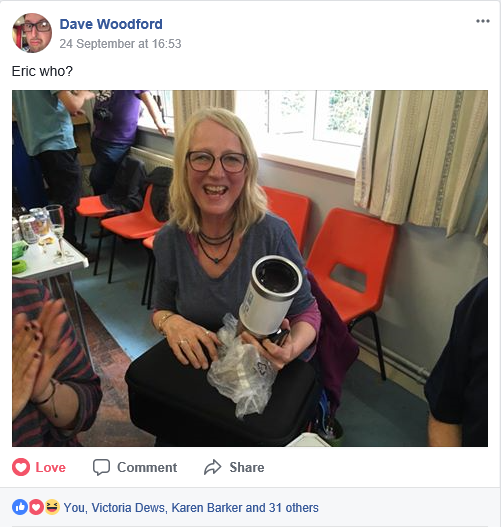 It has been said that astronomy is a humbling and character-building experience.  There is perhaps no better demonstration of the folly of human conceits than this distant image of our tiny world.  To me, it underscores our responsibility to deal more kindly with one another, and to preserve and cherish the pale blue dot, the only home we've ever known.