Blogging has been sparse for the last 6 months or so.  Just not enough time to put fingers to keyboard!  But that doesn't mean that astro activities have been lacking.  The lighter nights have meant that not much time has been spent at the eyepiece or the viewfinder, but I have been busy on a couple of little electronic projects.  I'll post about those soon enough.
This time though, I just wanted to show a quick couple of pictures I took a couple of days ago of the Great Cluster in Hercules, or M13 as you might know it.  Perhaps one of the most famouse of the globular clusters, it's a popular target for visual and photography.
The night was forecast to be clear for quite a long time, so I didn't rush into taking the picture, instead trying to teach myself the arts of perfect polar alignment and drift alignment.  It did mean though that it was gone 1am before I actually got around to taking any pictures.
In the end, I took 20 light frames of 45 seconds each at ISO 1600, then stacked them with 10 dark frames and 10 bias frames.  The first attempt at processing was OK, but I did think I could get a bit more out of it with a bit more time.
The first image is the result of the first set of processing.  Version 2 of the image then shows a little more detail and sharper detail.  I've also cropped it a little better.  Enjoy, and check back soon to see what else I've been up to in the astronomy hobby recently. 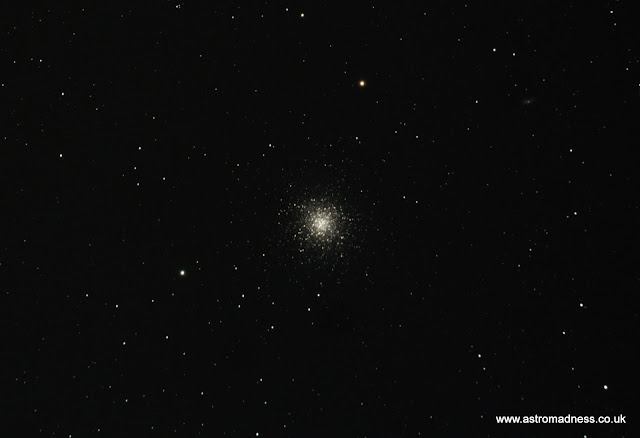 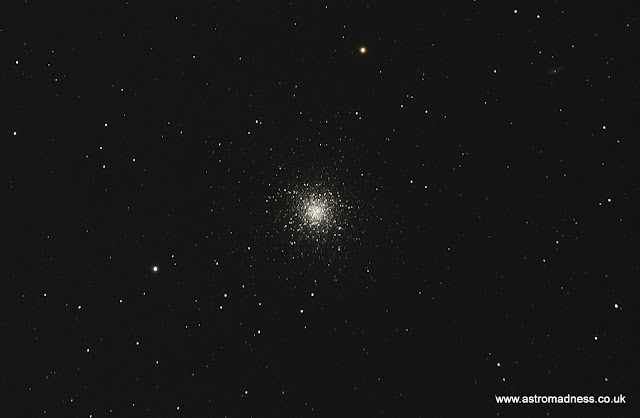