Astrocamp X - The Observations and Photography

As a follow up to the my previous post about Astrocamp X, it's time to put a bit more detail together on what was I managed to get out of the wonderful dark skies of Cwmdu.

First true night of camp and I decided to split my time a little between astrophotography and visual.  I was soon to be reminded how much time astrophotography can actually take.  I wanted to make sure that I my alignment and mount set up was as good as I could get it.
I decided on 2 targets for photography.  The first was an image in the Virgo cluster of galaxies.  Given that I couldn't get a decent visual through the 80 ED-R, it was quite hard to establish exactly what the scope was pointing at, but I took the frames anyway and would just wait until processing to find out what I had got.
The image comprises of: 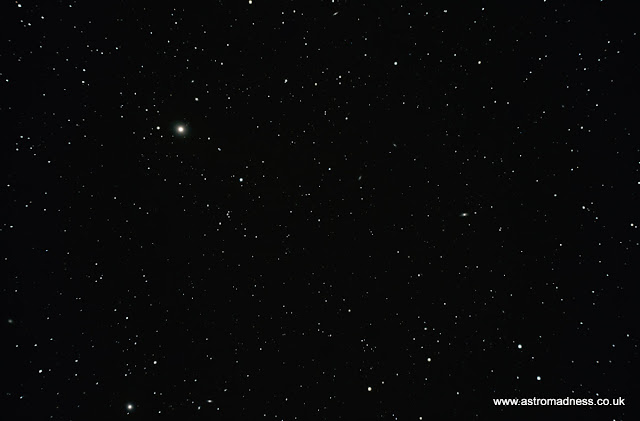 Initially, I thought I had captured no significant targets and assumed that I had missed the area of Virgo I was hoping to capture.  This was until I had more time after processing to really start looking more closely at the image.  Below is the same image, but with galaxies encircled in red.  For some reason although I used a focal reducer/flattener, the image does suffer a bit around the edges. 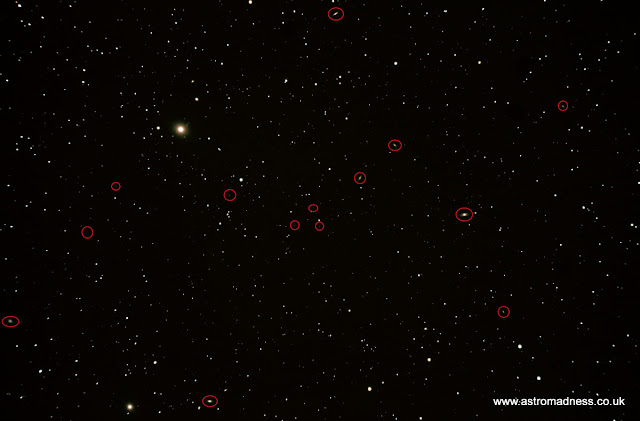 During the process of the images being collected, I decided to locate myself up on the common with everyone else at camp, and use the 300p SBT to do some visual.  I had compiled a list of targets that I wanted to observe.  The list was quite extensive, but I only managed to observe a few things before returning to the imaging kit.  Nevertheless, I did managed to tick of 3 new targets for me.
Back to the imaging, and after taking the dark and bias frames, I took a look around to find the next target to image.  After seeing that the galaxy cluster was going to be tricky to resolve, I decided to go for something of lower magnitude.  As Hercules was making it's way up into the sky, I decided on M13, the Hercules Cluster.  The image was created using the same ratio, ISO values and duration of light, dark and bias frames as the Virgo cluster. 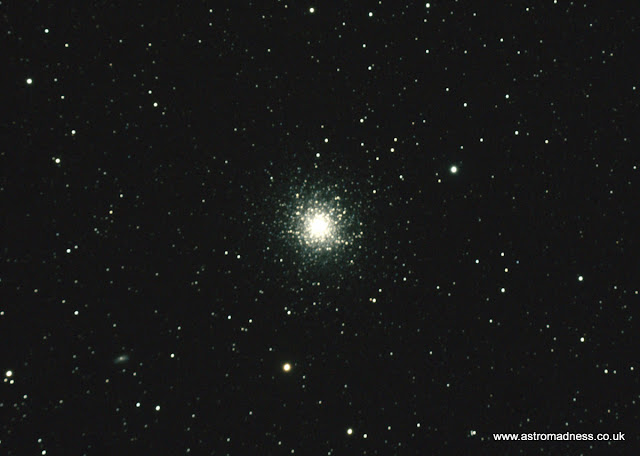 The image was processed and then cropped.  During the cropping process, I noticed that I had also captured a neighbouring galaxy.  After a bit of discussion, I was initially informed that the galaxy I had captured was IC 4617, a magnitude 15 galaxy.  It wasn't until I got back home and had a closer look that I realised that this was a mistake.  The obvious galaxy toward the bottom left corner of the image is in fact NGC 6207.  But again, the higher resolution image does actually show both galaxies.  Albeit IC 4617 is very small.

After the mixed results of Saturday night, I decided to concentrate solely on astrophotography on the Sunday night.  Conditions were a little hit and miss with light cloud coming through the sky throughout the evening.
My target for the evening was the vicinity around M86, again in Virgo, albeit a little further towards Coma Berenices that the previous night.  The number of galaxies in this region of the sky is simply outstanding.  Bearing in mind these are taken only with a 80mm aperture telescope, I was still able to capture and identify plenty of objects.  This image was taken using the following: 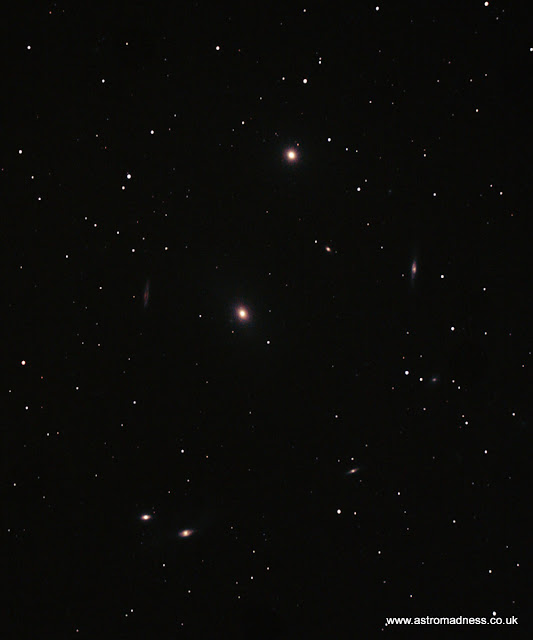 To help identify the galaxies in this picture, the follow marks out the visible galaxies picked up by the image. 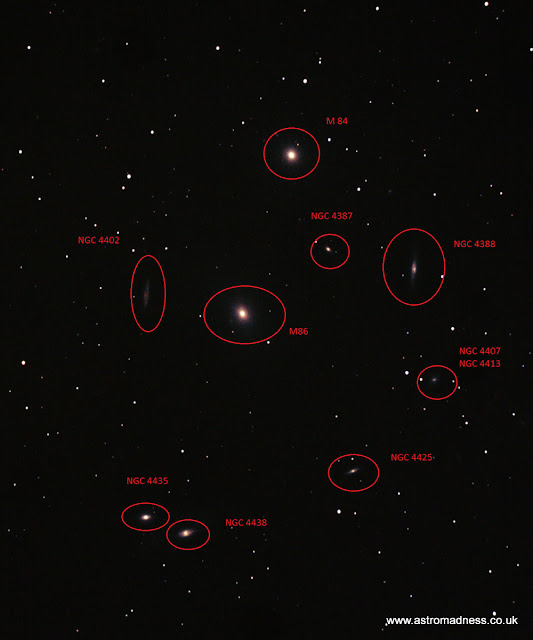 At first, I was disappointed with the end result of the imaging run, but following on from the processing and identification of galaxies, I actually am quite pleased with the way in which is came out.

I left camp after lunch on Monday, although I knew it was going to be a good clear night.  When i arrive home, I set up everything for another set of imaging runs out the back garden.  From the comfort of my own garden, and knowing that I didn't have to get up for work, I settled in for a long night.
In the end, I imaged 4 different targets.  The first target was the Beehive Cluster designated M44 in the constellation of Cancer.  It's a reasonably bright open cluster and quite large. 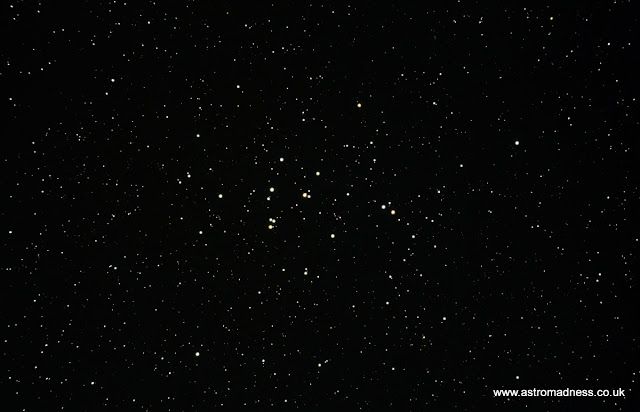 Other than the focus being marginally out, the image shows the main component stars of the cluster.
On the run up to camp, I had been reading of two comets currently visible in the UK sky.  During camp, fellow stargazers were intent on visually observing these two visitors to our solar system, and with some success it has to be said.  I decided that I would try to image these two targets.  The second target for the night, and the first of the two comets was Comet 41p/tuttle-giacobini-kresák.  It was making its way through the constellation of Hercules. 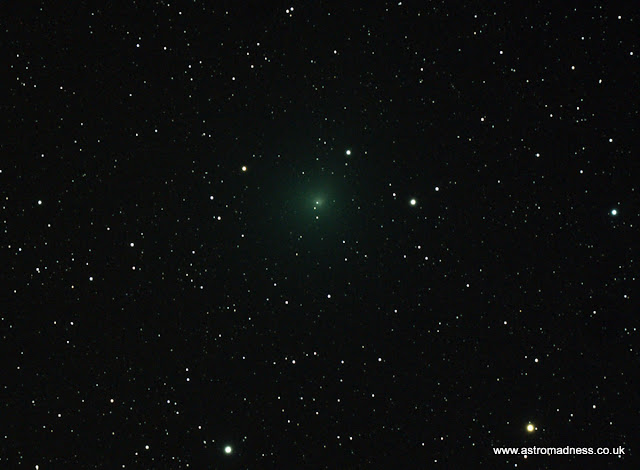 The image of the comet took on a green hue with a fairly non distinct tail just visible in the image.  To get the image of both comets, I used:
The third target to be imaged, and the second comet of the evening was comet C/2015 V2 Johnson.  Again, at the time of imaging, the comet was making its way through the constellation of Hercules. 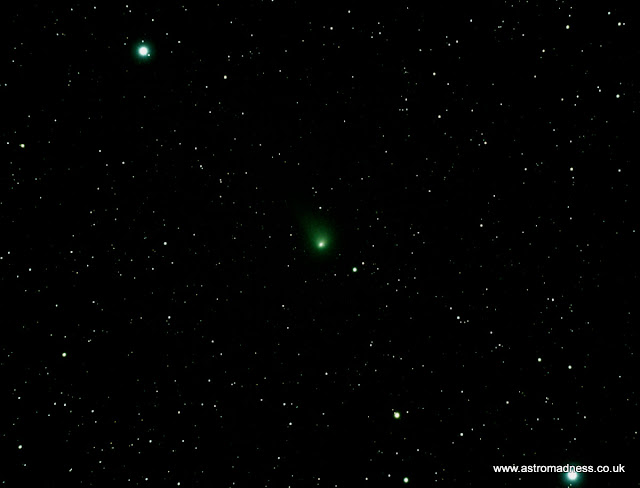 C/2015 V2 Johnson was putting on a brighter display than the previous comet, at the time displaying a single quite wide, but better defined tail.
As the night went on, I could see the constellations of Cygnus and Lyra beginning their ascent up into the Spring night sky  A sure time that Summer is on it's way!  Lyra also brings on of my favourite visual targets, The Ring Nebula.  It's a small target to observe and photograph, but it is very pretty and worth the effort.  I have attempted to image it before, but I believe the colour is much better using a refractor rather than my previous attempts. 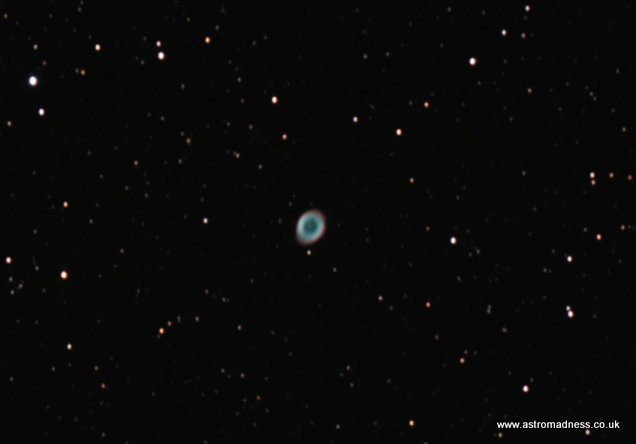 To get this final image, I used the following:
This represented the end of my imaging session, and the end of camp for April 2017.  I've learnt loads more about what I need to do to set up and get the best out of my imaging equipment without guiding.  I need to pick up from where I left off with my guiding and PHD2, a steep learning curve in anyone's book.  I've decided that I need to invest in a Bhatinov Mask to help with my focusing, and also a longer dovetail bar to try to move the scope further along the saddle on the mount.  This should help achieve better balance.
Until next time, thanks for reading!