First and Second Light with the AVX

Greetings!  Back in June, I invested in a new equatorial mount.  When I first started in the hobby of astronomy, my first thought was to avoid anything computer driven or Go To related.  I'm glad I did.  Since I got my first scope, the Sky Watcher 150p, and later, the 300p SBT, I have learnt so much about the night sky.  I can comfortably find my way around constellations, and have little problem finding target locations.  I had no need for such technology, preferring the pure method of star hopping and constellation recognition to help me find my targets.  Or so I thought.
As with many astronomers, sooner or later, you may get pulled into the dark arts of astrophotography.  This was the case with me.  But I wanted to do it without a massive outlay of funds.  Cutting a long process short, the best mount I could find that presented me with excellent reviews, recommendations from friends and available on a reasonable budget was the Celestron AVX mount.  My intention is to use the 150p reflector telescope in combination with my unmodified Canon EOS 1100d DSLR mounted on the AVX.  And, here she is...

﻿
﻿
﻿
The mount set in it's box for quite a few weeks over the weeks either side of the Summer solstice.  Though the evenings have been clear, the period of astronomical darkness is so short, it means that the window of opportunity is very short for any sort of night time astronomy activity.  But then, last Friday, on a night when I had no work the following day, I was able to spend some excellent quality time outside, and really take my time over getting things set up.
Before I went out, I had a look on Stellarium while waiting for the sky to get suitably dark, and I made a note of some targets that I wanted to attempt to getting some data on.  Top of the list was M101 - The Pinwheel Galaxy, followed by M57 - The Ring Nebula, M13 - The Great Cluster in Hercules, M27 - The Dumbbell Nebula and finally the Veil Nebula to try to push the limitations of the camera and the equipment.  It's fair to say that I did not know what to expect from any of the results, and in hindsight, it was all a bit of a gamble to be honest!
So, without further ado, these are the results.  All the images were processed in DeepSkyStacker 3.3.4 before exporting the image as a .tiff file, and then imported into GIMP2 for additional processing.  For the purposes of posting and compression, the final images were then exported as jpeg images.  I've included a description of the frames and exposure times etc. used for each target. 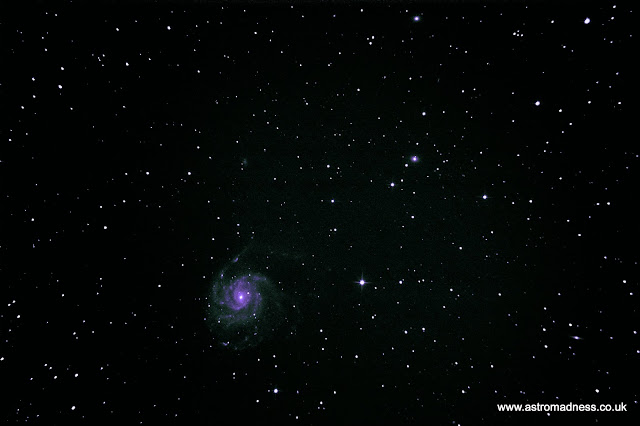 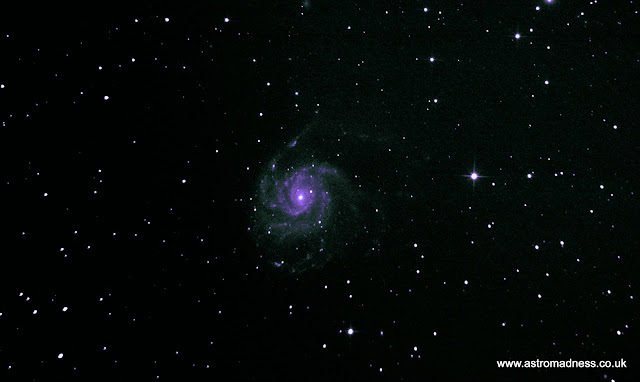 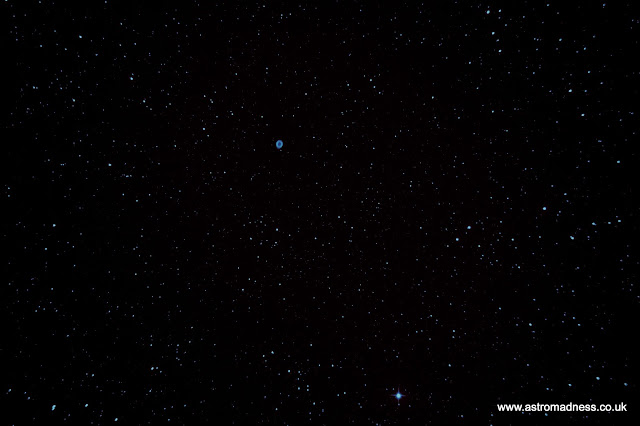 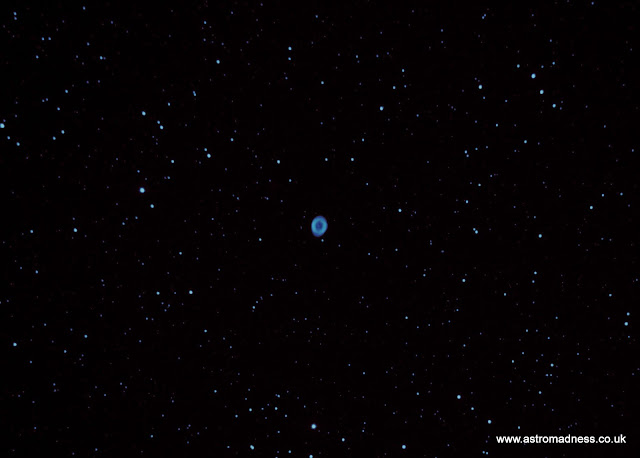 M13 - The Great Cluster in Hercules 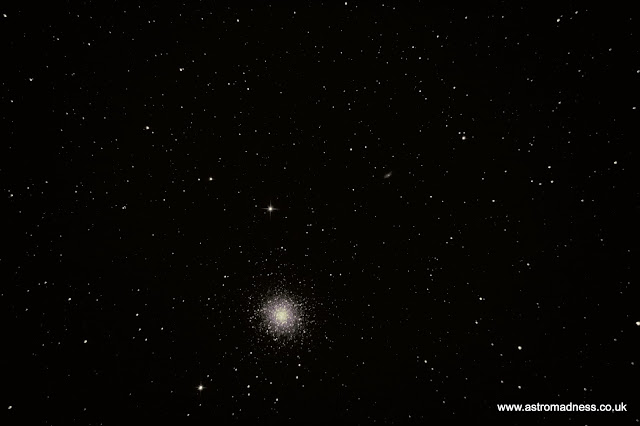 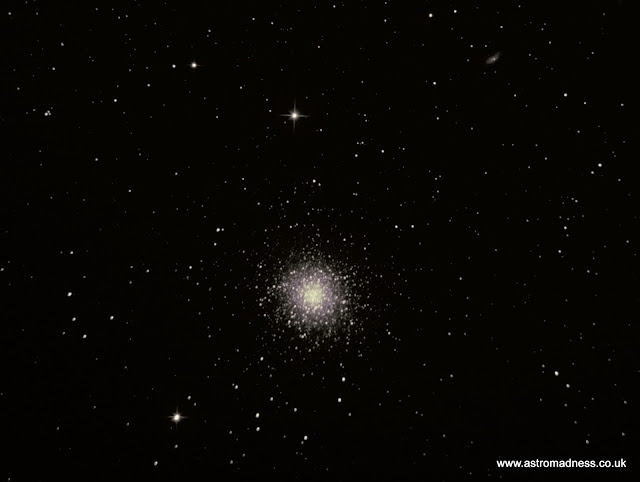 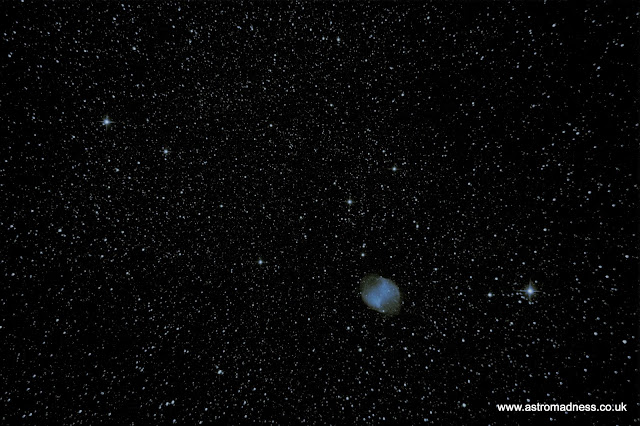 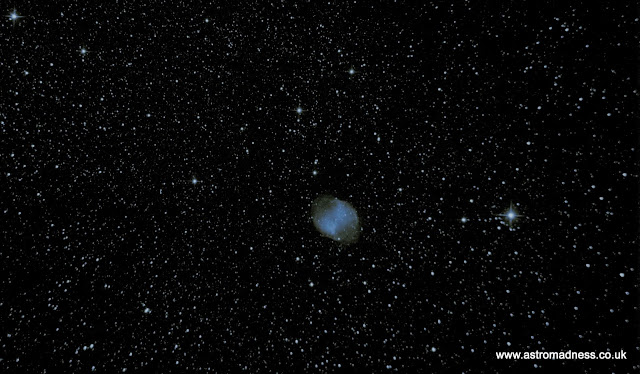 And finally, the Veil.  This is an object that I observed for the first time last year with the SBT.  To observe this with a scope requires a large eyepiece with a very big field of view.  Even then, the whole nebula doesn't fit in the field of view.  You are reduced to only being able to see the constituent parts individually.  Therefor, trying to capture the whole target in one frame was not going to be possible.  At the end of my imaging session, I wanted to try capturing data of any part of the veil nebula, so I chose it from the handset and allowed the scope to lock onto the area of sky where it could be found, and started collecting the data.  I started with a couple of preview pains, and if I really tried, I thought I might just be able to make out some wispy clouds of gas, but I couldn't be sure.  This was going to be a tough capture.  I decided to tweak the camera settings further to pick up as much data as possible.  After stacking, I still couldn't be sure if I had something to show for my efforts.  It wasn't until I started processing the tiff file in GIMP2 that I managed to start teasing out the detail in the image.
10 light frames, 2 dark frames and 2 bias frames.  Light frames and dark frames were all 60 second exposures at ISO 800. 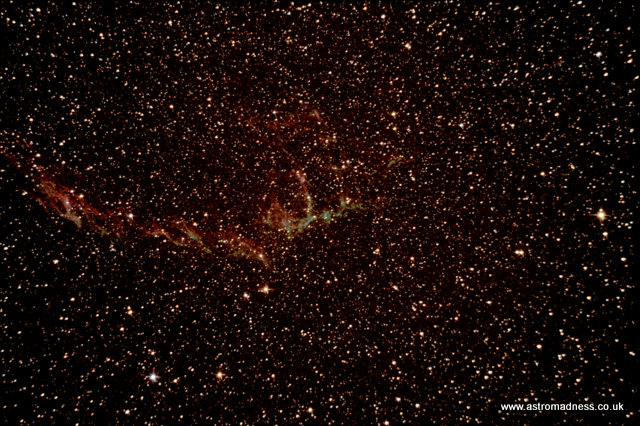