The SBT Comes out to play!

As we amateur observers drag ourselves out of the 2 month hibernation that is indicative of the Summer in the UK, we look forward to true astronomical darkness eating into our evenings. Signs of darker evenings are always welcome in this household, though the neighbours will once again be holding their heads to their windows with hands cupped around the eyes wondering what on earth is going on in our garden as some loon sits down reading books and charts by red torch light in the freezing cold. Well, last night, the SBT broke its summer imposed observational blindness as it was unleashed for the first time under a clear and almost dark Summer night sky. 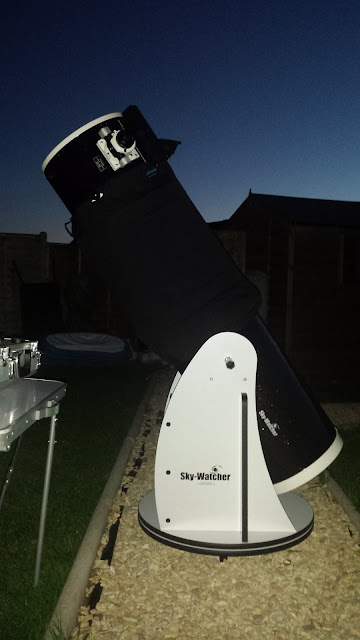 I can’t go much further without mentioned the coming Perseids, for these were the initial main reason I wanted to get under the stars. This year’s display is set to be a good one, with the moon rising not long before sunrise allowing for good dark conditions throughout, only the weather and cloud cover to overcome. The nights running up to the maximum ZHR have been forecast to be good for observing, although the night of 12th August might not be so great. Nevertheless, an opportunity not to miss.
I hadn’t done much in the way of pre-planning for this session, so was happy to just re-acquaint myself with the night sky and visit some targets ad hoc. A brief check on collimation, and some Telrad alignment, and all we set to go by 10pm BST. The air was dry, and clear which gave some excellent observing conditions. Looking to the West, the last daylight seemed to drag its heels and take an age to finally disappear over the horizon. Looking up, Cygnus was high in the sky, almost directly above and presents it’s rich array of targets.
I decided to pick out a favourite of previous times when using the 150p, M57, The Ring Nebula. Even though there was still a considerable amount of daylight in the sky, the SBT helped me pick it out quite easily. I’ve always found finding M57 straight forwards because of its position. The contrast between it and the background sky did mean that picking out the central star was almost impossible. But, the fact I could see it was pleasing.
So, from planetary nebula to globular cluster, and M56. It’s a small cluster, fuzzier compared to others making the resolution of individual stars very tricky. I thought the 12mm BST give me the best view of the cluster. Even though I have seen this cluster before, I don’t really recall it so wouldn’t exactly call it a memorable target. Then again, M is for Messier and not Memorable!
On the last page of my notebook that I wrote on, I took the time to list the remaining Messier objects and their constellations that I have yet to locate and observe. This proved to be an inspired decision because it gave me an easy source of information of what to observe next. And, with the added bonus of them being new ticks.
Next on the list for the evening, and the first new object was the open cluster of M39. This took quite a bit of time to locate, which was surprising given how bright the cluster actually appeared when I did locate it. It’s a really pretty, yet sparse cluster with perhaps around 3 dozen stars easily resolvable. Due to its location in Cygnus, against the backdrop of the Milky Way, the edge of the cluster melted into the surrounding stars.
The next new tick took me to the constellation of Pegasus. M15 is another globular cluster. From my observing location, I had to line the SBT up, pointing between the gap in houses to get the target in the eyepiece. The cluster is quite small and has a very dense core and at 12mm, I could start to resolve possibly hundreds of pin pricks of individual stars in the cluster. Another new target to add to the list, and on to the next.
In a move away from that area of the sky, I moved the SBT around and pointed it towards Ursa Major. The next target was M97, a planetary nebula called The Owl Nebula. The nebula itself I picked up quite easily. But, because of conditions and the neighbours’ kitchen light, I found it hard to make out the supposed dark areas of nebulosity to form the eyes of the owl. At magnitude 11, the SBT picked it up well though.
Finally, and annoyingly because it was a school night and conditions were superb, the next target was never something I thought I would get to see. The notes for the target in the book start… “Ding Ding Jackpot….” I decided to push the SBT back around to Cygnus and pop the 32mm EP back in. The Veil Nebula. A lovely contrast of grey nebulosity arching across the entire field of view of the eyepiece. There are 3 distinct regions to the Veil Nebula. The Eastern Veil, the Western Veil and Pickerings Triangle. I had picked out the Eastern Veil. Though I seemed to find it quickly, I did find it hard to return to when moving the scope around to try and work out the extent of it. I know a large field of view was needed, so I kept the 2 inch 32mm EP in place. However, an OIII filter would have helped bring the nebula out more, but my OIII filter is only 1.25”, so too small. There are 3 targets making up the Eastern Veil, NDC 6992, NGC 6995 and IC1340. The Eastern Veil is also catalogued as Caldwell 33. Apparently, the Western Veil is supposedly easier to see, but I did struggle, and indeed, failed to pick it out. I did see the star designated 52 Cygni repeatedly as I scanned the area, but couldn’t make it out on this occasion. Next time, with more accustomed night vision, I hope to pick it out.
And that brought an end to the session. Some excellent ticks and an absolute highlight of locating the Eastern Veil. So, thanks for reading. Another post will be filed soon enough with news of AstroCamp in September, and the inevitable construction of a tick list of targets, only for hopes to be dashed with rubbish weather!
Cheers!
Labels: Caldwell 33 Eastern Veil IC1340 M15 M39 M56 M57 M97 NGC 6992 NGC 6995 Owl Nebula Ring Nebula Veil Nebula