Good day to you.  It's been a little while since I've had the opportunity to get out with the telescope. Being winter time, the weather hasn't been brilliant for the last couple of weeks.  To add to that, the last period of clear skies that we have had around here was back during full moon, which kind of washed everything out.  But, there are plans afoot for the coming months....
So, last night, the forecast was pretty good for the whole evening.  There was also a conjunction of Venus and Mars low in the West.  Venus has been putting on a cracking display over the last month or so, being one of the first things you can pick out as daylight drawers to an end.  Just after sunset, I set up out the garden, got everything aligned and brought the scope around to Venus, already bright in the sky.  When I observed Venus last year, it was during a crescent phase for the planet.  This time however, the planet presented itself as a near perfect circle of bright light.  It also had reasonably quick colour shift from white to blue to yellow, all within the space of a second or less I would say.  In the same FOV, although not visible to the naked eye,   A short distance lower and to the right of Venus, I saw another star, which I have since found out was HIP 417, a magnitude 6.3 star just 453 light years away from us.  I could also see Mars with it's very distinctive orange appearance.  Much smaller than Venus, but equally as distinctive. 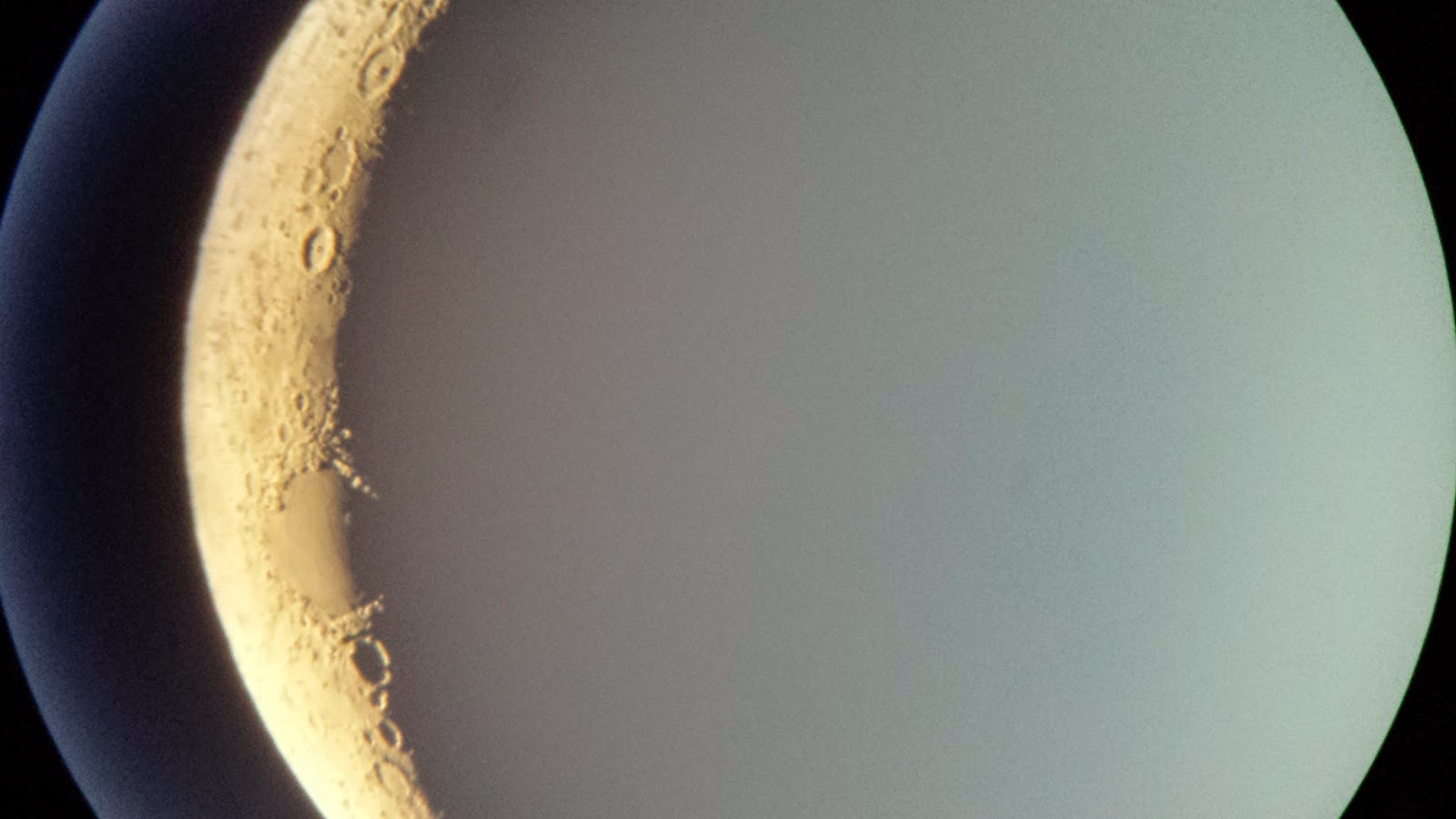 Whilst in that area of the sky, it was also an opportunity to visit the waxing crescent moon.  It was nice to be able to look at the features across the thin terminator in this early stage of the lunar period.  As it was not long after sunset, there was also a reasonable degree of Earthshine on the rest of the lunar surface.  I managed to pick this up by hold my phones camera lense up to the eyepiece.


For the time being, it was time to head indoor to let darkness fall, to eat and to think about what to target for the rest of the evening.  Just grateful for the opportunity to go out, rather than pursuing specific target, I decided to just have an explore through the Messier catalogue.  In total, I visited 9 Messier targets, all which I have observed before.  M34, M33, M35, M42, M31, M32, M1, M44 and M67 were all on the list.  One general observation I made was that even though the skies were dark, and the weather was quite clear, seeing conditions were only average.  Looking through the eyepiece, there seems to be a lot of background light pollution still in the sky.  The weather forecast was for a cold front to come in across the UK with rain, so I expect that there was a large amount of moisture in the air, but not cloud.
Midway through the session, I observed a fantastic fireball falling steeply to the west horizon.  It was very bright and had a lovely trailing tail as it headed for the horizon.  I tweeted about the observation and received several confirmations from others saying they had seen in too.  I even had one person tweet me to say that 'we saw that on M6 heading to Birmingham'.  I resisted temptation to reply that what I had seen was definitely in the sky, and wasn't travelling up the motorway to Birmingham.  I don't think she would have got it though :-)
Towards the end of the session, Leo was up high and was visible from by observing position.  This is not an area of the sky I have observed very often so I decided to track down some targets.  Though there are many targets around Leo, I think many of them at approx mag. 10 and above are beyond the capabilities of my current scope.  If I get to use a larger aperture scope at some point, I would like to visit this area of sky again.

This session was the first time I was able to try out my new tripod.  Though I have my pier and mount set up permanently in the back garden, there are times when I need or want to travel with my scope.  Up until now, I used the standard aluminium tripod that come with the Skywatcher EQ 3-2 mount.  Whilst the tripod itself was more than capable of handling the scope, and its comparatively light load, I have always had a problem with one of the adjustable legs.  In truth, I should have sent it back for a replacement the day it arrived as that was when I first found the problem.  But, I didn't want to make a fuss, so I stuck with it.  Over the 16 months or so that I have had the scope, I had a few attempts to fix the issue and extract the faulty bolt, but failed.  So, I decided to go for a replacement and I got in touch with Tring Astronomy Centre in Hertfordshire.  I placed an order not for a like for like tripod, but for an upgraded steel tube construction tripod instead  Again, from Skywatcher, but initially intended for their larger mounts.  The tripod is much better, much more sturdy and more importantly, works perfectly!

The weather has turned bad.  The rain is banging against the window, so it's time to start scouring the weather websites for the next break int he cloud.  Cheers!
Labels: Fireball M1 M31 M32 M33 M34 M42 M44 M67 Mars Tring Astronomy Centr Venus